We have been in and around Fairhaven / Bellingham today. They are two small towns next to each other in Whatcom County [think Devonport/Takapuna]. We have been catching the buses around as they are free this week because of the State Fair! All the bus drivers have been super helpful, which has been great.

Fairhaven reminds me a bit of Devonport – close to the sea, quaint shops, lots of art and places to eat. The weather has been really lovely, although I am now carrying my sweatshirt with me, as the sun is hidden behind the thick smoke that envelopes Washington State.

When we were in Fairhaven we booked our train tickets to Vancouver. We depart on Tuesday. We decided to stay here a couple of extra days, as it is cheaper than Vancouver. It is a nice place and has a bit to see and do. Our hotel, is budget, but gives us breakfast and it is easy to catch the bus from here. 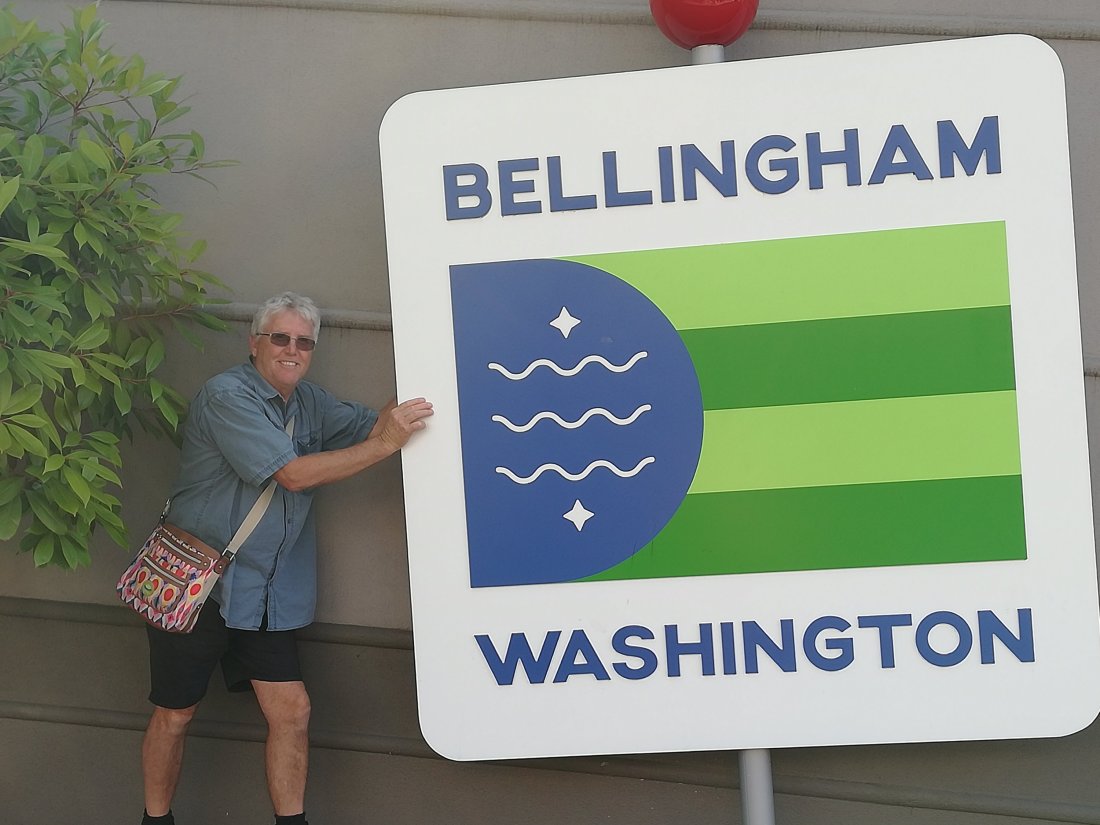 There is a lot of street art and you get used to the life-size sculptures everywhere, so when one of those is ‘live’ and touches you on the arm as you go past … you leap out of your skin, freak out and then laugh out loud! Colin hadn’t noticed her / the tip jar and just seriously nearly wet his pants! We sat and had a coffee, watched it happen to a whole pile of other people and then ventured for a photo. She only needs to do two 8 hour days in Seattle and that is her work done for the week! She said she had regular breaks, but it is so not something this ‘fidgeter’ could do…a lot of mindfulness I think!

Spark is a Museum here in Bellingham that is dedicated to the electrical and radio inventions and how they changed the world we live in. Colin though it was more interesting that I did, but is probably no surprise. When the ‘docent’ joined us and started giving a sort of tour, it was much better for me. I had never realised that the grammar phone [probably because I have only seen them in a museum!] wasn’t an electrical appliance. As we were leaving we got a very quick display of the MegaZapper Tesla coils … now that was cool.

So thinking ahead, we were looking for reasonable accommodation in Vancouver for one night before our cruise … it is like looking for a needle in a haystack. It is unbelievably expensive, even the AirBnB’s!! We were both getting totally fed up and then Colin goes I found one!! So I google the address to see if it is close to the train / cruise terminals and I can’t find the address … Colin (totally fed up by now) says ‘I am just going to book it…’. Then we get a confirmation text message and he has made a booking for Vancouver, Washington State NOT Vancouver, Canada – hence it was half the price of what we were looking at!!!! Worst part is that is was a non-refundable deal with Expedia. Hmmmm – we called Expedia but because it was Friday night, they customer service ain’t open til Monday! Really – I would have though they had 24hr service – well they do actually but no-one who can make a decision on anything … basically a 24hr message service and that’s it.

San Juan Islands are pretty famous in this neck of the woods, and we decided to do a cruise which included lunch and hopefully a chance to see Orca in the wild. The Salish Sea encompasses the Islands between the Pacific Northwest of US and Victoria, Canada and the body of sea that is the Puget Sound.

Our first port of call was Friday Harbour, which was just beautiful. A sleepy seaside town, with beautiful hanging baskets, gorgeous shops and galleries (and heaps of wonderful places to eat). We wandered around here for about 90 minutes before boarding our boat for lunch and the ‘orca hunt’. With the smoke hanging over the area, trying to get nice pictures was almost impossible. The horizon in every direction was just layered with smoke. The sun couldn’t really poke it’s head out, but tried all day.

The tour companies up here are all looking for the orcas and radio each other when sightings are made. Fortunately for us we we able to find a small pod of these amazing graceful animals, who were feeding in the deep channel between two islands. They are just amazing to watch and the hour we had trailing them went by so fast. The whole area reminded me of the Bay of Islands. The day would have been perfect if it had not been for all that smoke.

So we spent Sunday catching up on washing (it has been a week?!?) and had a look around the local shopping mall [Bellis Fair Mall] and I was able to get myself a warm jacket to take to Alaska [I had lost mine rushing through Hawaii airport – that nightmare was 10 weeks ago!).

ps: sorry that the Seattle post was out of sequence – we need a good WIFI to publish them!! I hadn’t realised that it had not loaded and was sitting in ‘drafts’