One thing that I have learnt along the way [actually everywhere we have been!] is that the Irish have roots in every city. 🍀Their hardworking ethos and contribution to local communities has been a huge feature [especially the pubs!] – there have been Irish monuments everywhere we have been, as tributes. I am embracing my Irish heritage on this trip and am looking forward to getting to Ireland to explore my ancestory. I also saw [in Boston I think] a plaque that said … “thank goodness the Irish discovered Guinness or they may have taken over the world”. 💚

I also discovered that halloween is actually an Irish thing!!!!!!!! Who knew!! Certainly not me!! Here is me [with an Irish father] firmly not partaking in halloween as I as I believed it was an American tradition, that I just didn’t need to be part of it (I am not quite sure how I came to that conclusion?!?).

You can be rest assured, that I shall be taking up this ‘Irish Tradition’ upon my return and I will embellish our house with halloween things and encourage the kids to knock on the door!! I will make halloween cookies, have lollies and I will not pretend that I am not home any more.

Now I know that our boys are not reading my ramblings [thank god!] or I may have to organise counselling for them both for not ever letting them partake in halloween in the past. I am still not sure about kids who are generally obnoxious and wouldn’t say ‘boo’ to you in the average day, but who are happy to knock on the door and ‘ask’ for lollies on 31st October every year, but in the spirit of not being a grinch, I feel that I shall embrace my Irish Heritage … maybe!!

Our next port of call was meant to be Bar Harbor [in USA]. We had a 7.30am immigration call for our floor, then we were planning a quick breakfast and then off the ship to explore. BUT the weather ‘lost-the-plot’ and we were confined to the ship for our own safety. When the Captain makes an announcement to ‘all areas’ at 7am in the morning you know it is important! We were advised to continue with immigration, but that we would not be leaving the ship. This was because it was a ‘tender’ day and the safe transfer between the ship and the shore could not be guaranteed!! Onwards to Boston, through the thunder and the rain, and the ship having a slight roll.

As we had already done immigration on board the ship the previous day, we were straight off in Boston. The weather in the morning was cold and blustery, so instead of our usual self guided walking tour we got tickets for the hop on / off bus. These are actually a great way to see the city, and gleen a bit of history when you have limited time. After a loop we hopped off and did a bit of a walk on the ‘freedom trail’ [which follows the path of the American Revolution] while the sun was out. 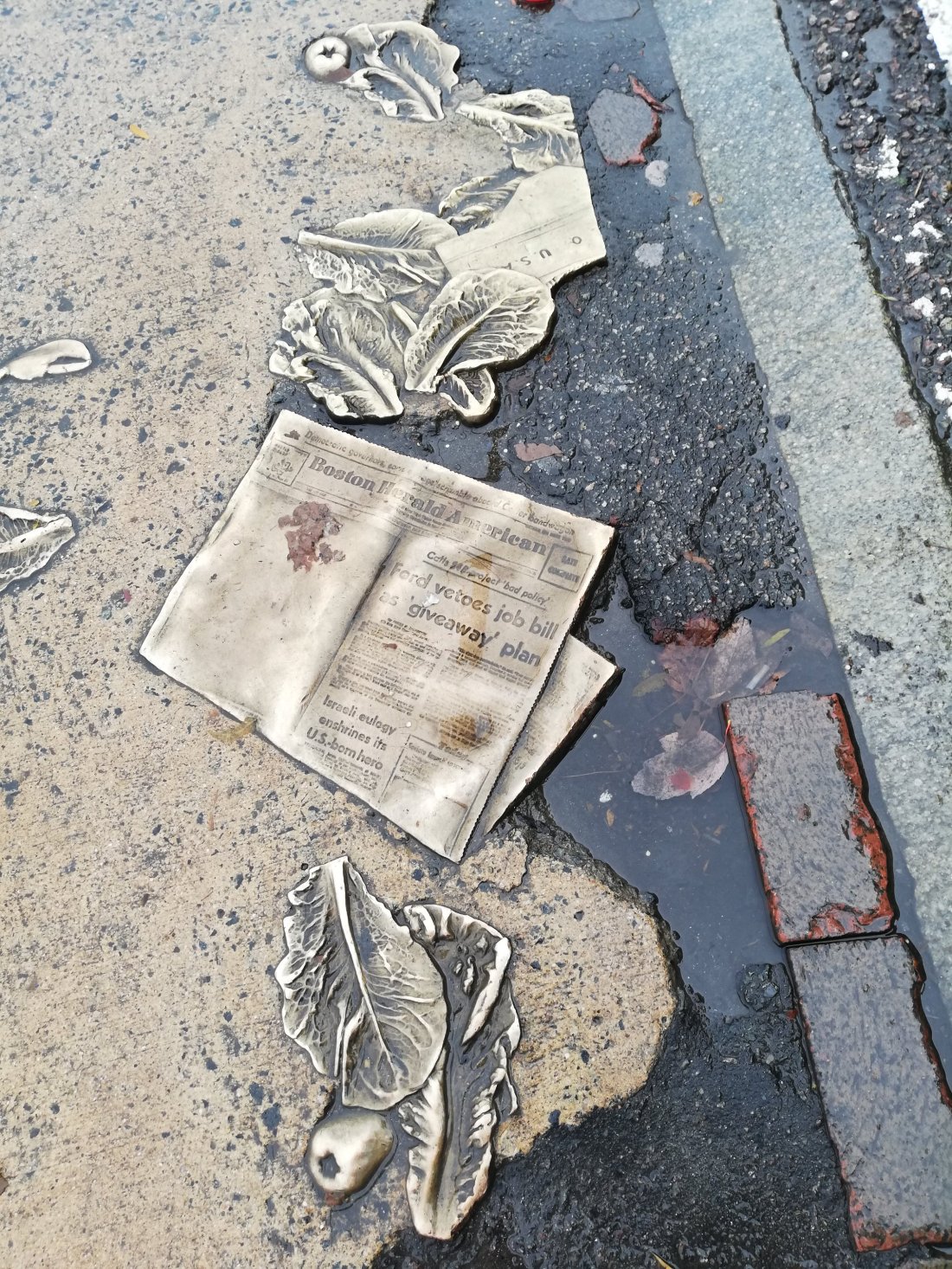 We walked through Quincy marketplace [loved the ‘sculpture’ in-bedded on the road that looked like ‘market’ rubbish!] and the public gardens [which were just so gorgeous] and past a few churches and cemeteries with such amazing history [set amongst huge city buildings!]. 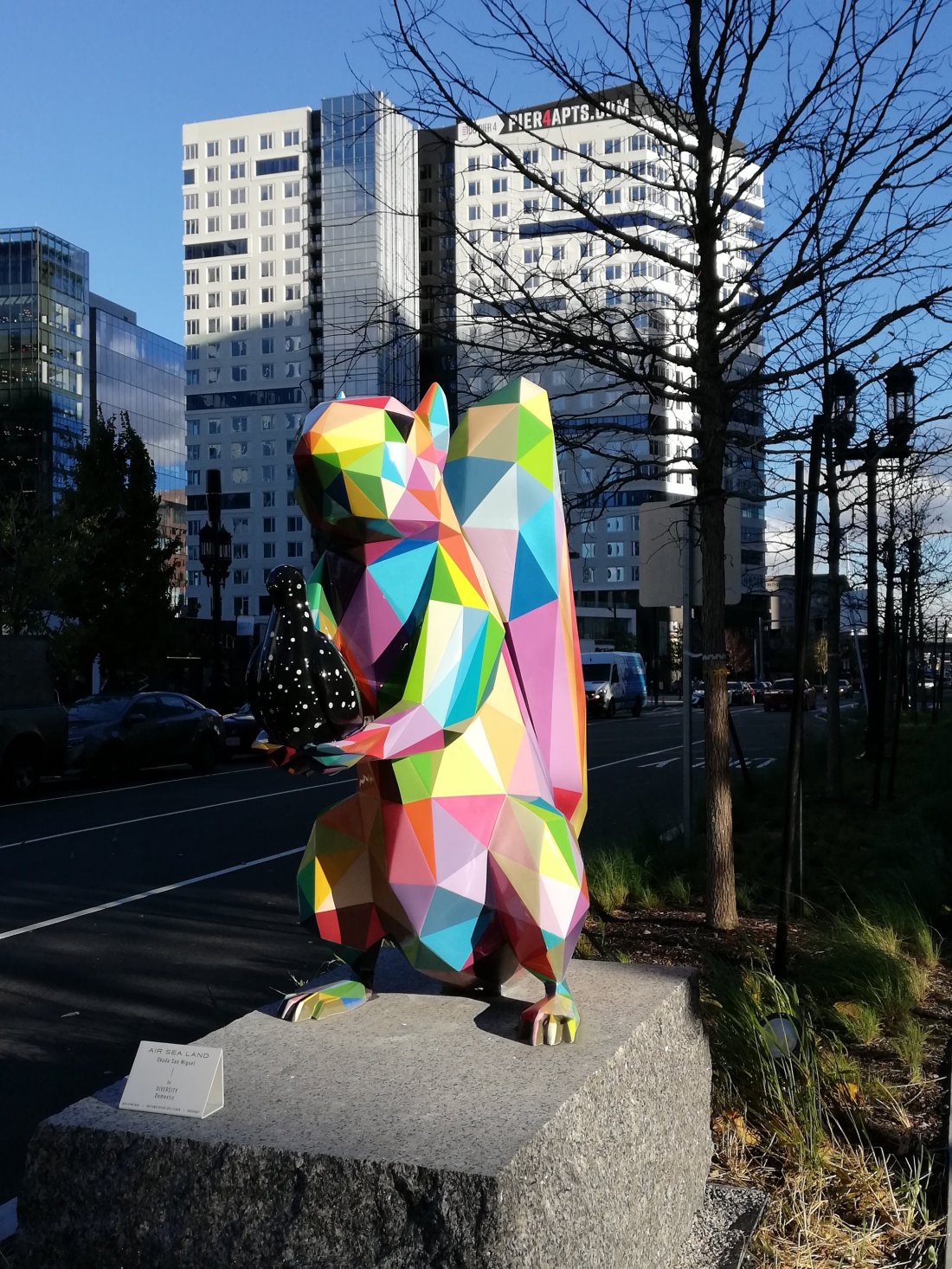 There are statues and sculptures throughout the city and such beautiful buildings. We had a great time here and while it was raining we had a beer in the ‘Cheers’ Bar – “where everyone knows you name …. “. After thousands of steps [so glad the phone counts them!] it was back to the ship where we discovered they were very kindly playing a few of ‘Cheers’ shows on the Cruise TV, such a funny programme – even now. 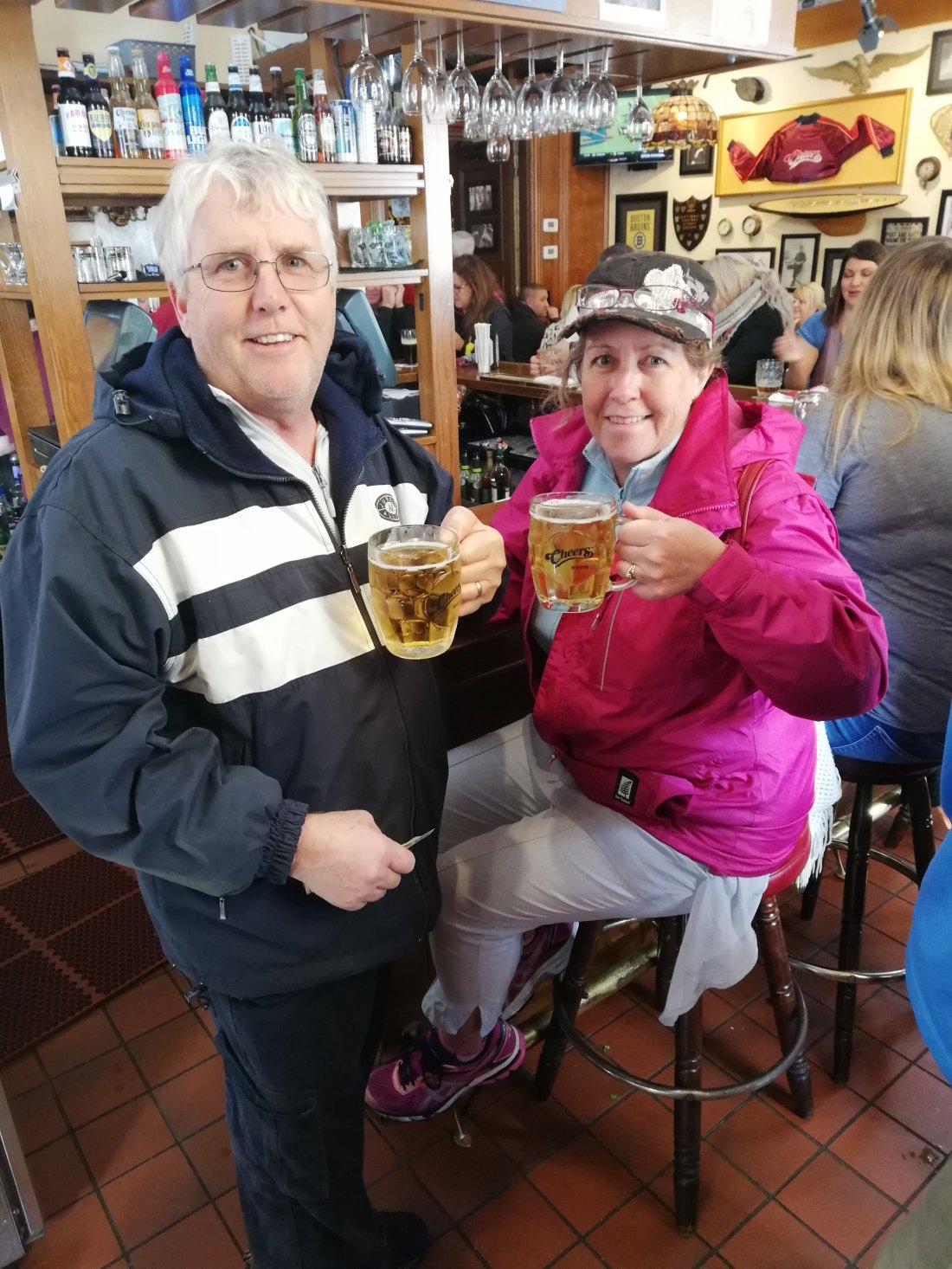 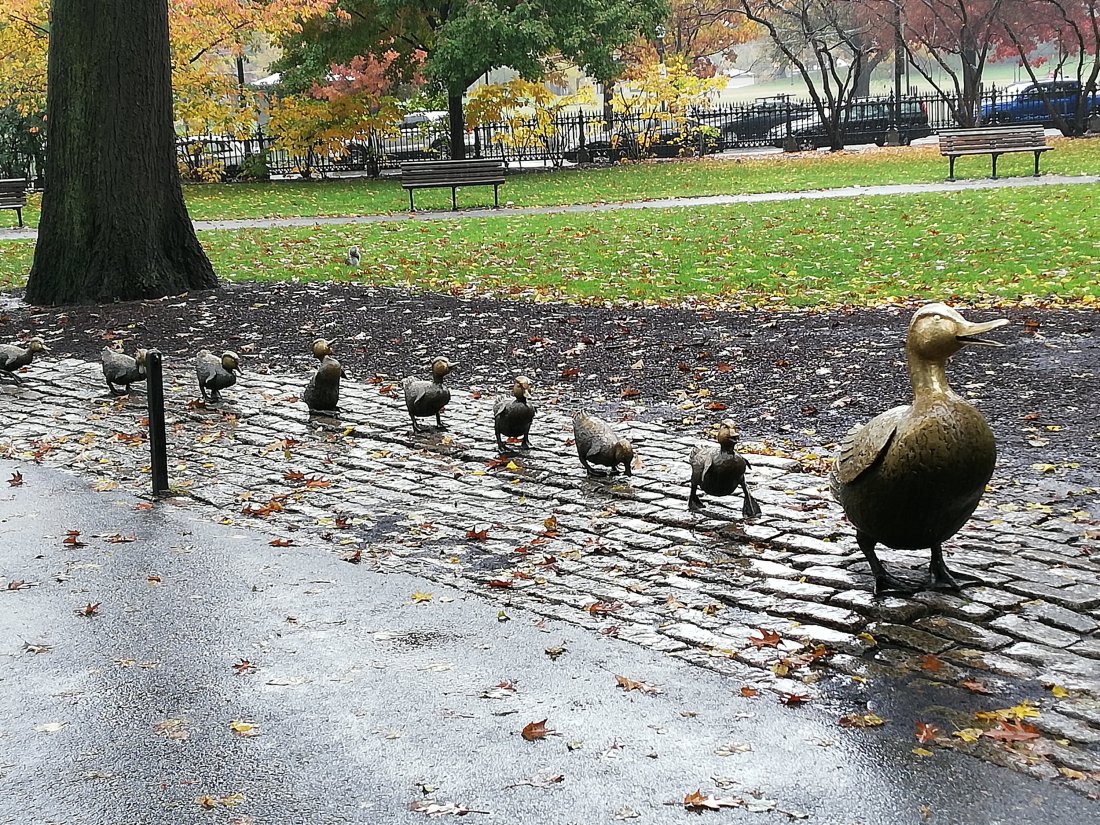 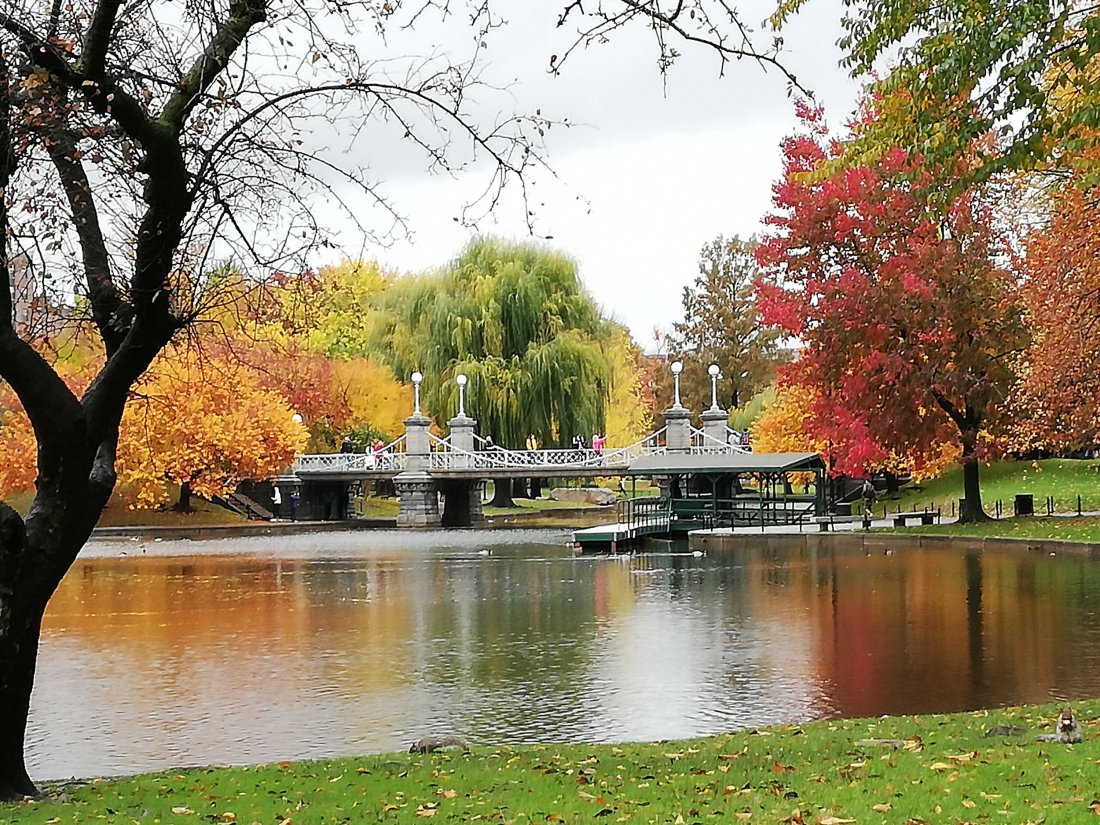 So we knew we had a really short day in New York! Up and at it early for the 6am sailing under the bridge and seeing the Statue of Liberty [at approx 100 metres she has a mighty presence – even in the rain!]. We only had such a limited time here, especially as we docked in Brooklyn [close to the famous Brooklyn Bridge on the East river]. You need to allow an hour each way for the ferry, so this seriously comprised our time!!

We decided to head to the 9/11 memorial site and museum, especially as it was such awful weather. Glad we got there early as it was so busy. 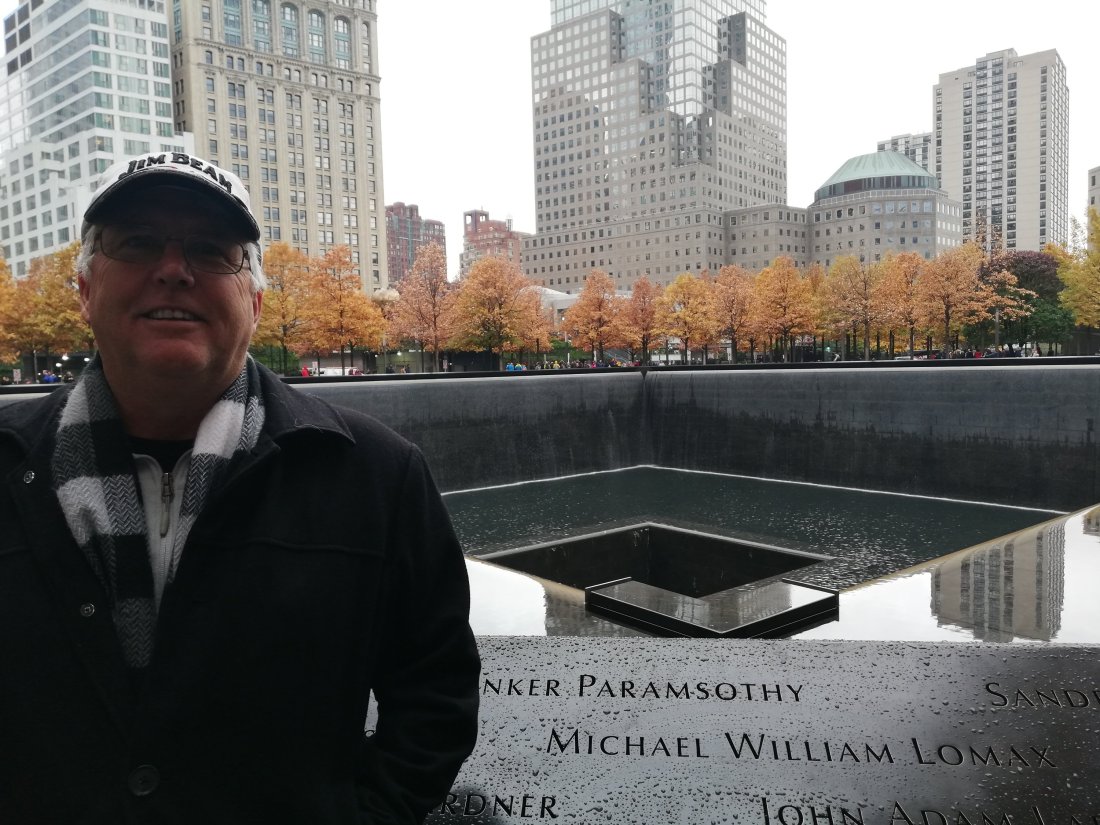 The 9/11 site is much more emotive than I was expecting. From the twin reflecting pools and the only remaining tree, to the actual museum, I had not really understood it would be quite so challenging to visit. But just like the Holocaust Museum in Houston [on a previous trip in 2016] (and the six glass pillars in Boston [each representing 1,000,000 people who perished in WWII]), it leaves you feeling empty, somehow void of emotion and with a heavy heart.

You head down into the museum, and a wall of the original building is still there, with a twisted piece of steel and a flag for every nationality lost. You can walk around the perimeter of the towers on their original footings. There is twisted metal, ambulances, fire trucks and crew gear, items from survivors and also items that were found up to five blocks from the site. Put all that together with audio and visual reminders of the day [and the aftermath], short films [including incredibly disturbing footage of people jumping], and being able to pick up phones to listen to people’s messages to loved ones, flight attendants mayday calls, 911 calls and then all the news footage – it was an exhausting 4 hours being taken back in time to see this vivid and harrowing, yet powerful and sanguine exhibition. I only listened to one ‘phone’ call and decided that that was enough for me [fortunately tissues are dotted around].

Visitors were subdued and quietly cried, others just sat. I understand from a ‘docent’ that people who have lost loved ones, just come and sit – especially those who never had remains returned. I stopped taking photos [I am only just going to share a couple here], as I somehow feel that I don’t need the photos, to know I have been there.

We only had time to do this one thing as we had such limited time here [they only ever spend limited time in this port, because the port fees are so high!], but be sure New York – we will be back, we need to get to know you!

Part 4 coming shortly … last one for the cruise!

One thought on “Part 3 – Quebec City to Fort Lauderdale by Sea!”