Especially at the Cliffs of Moher! [but more on that later] 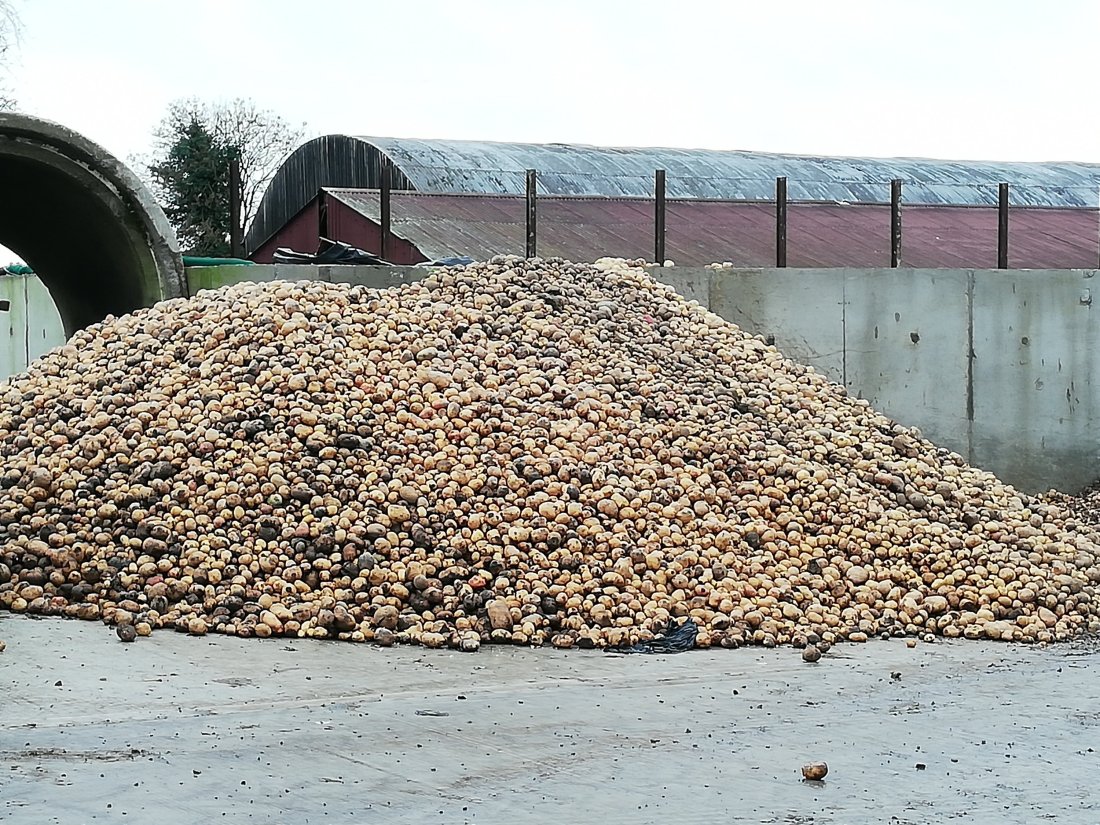 Ireland has been on my ‘bucket list’ for such a very long time, and although I had planned to be here for St Patrick’s day, it didn’t quite work out like that with our other adventures! So although it has been a bit cold, a bit wet, a bit grey, a lot windy and a bit miserable for most of our days, we have been having an amazing time. 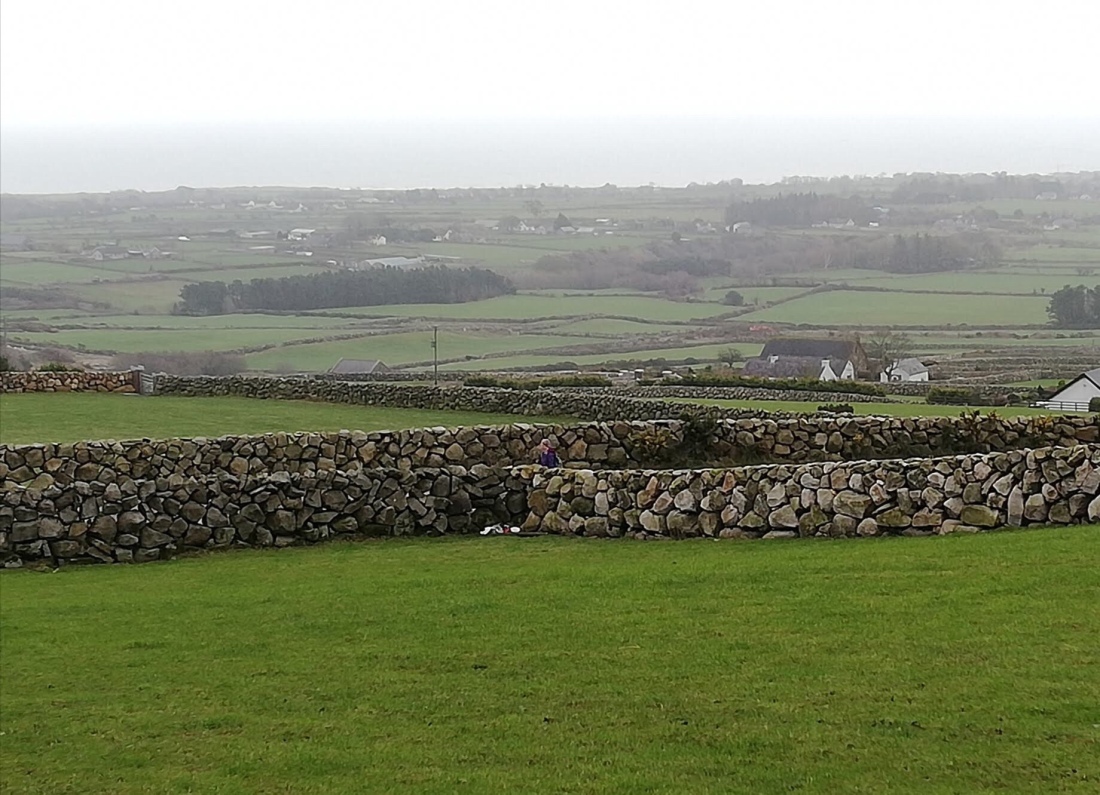 When we arrived in Dublin we hired a car and headed to Northern Ireland. I was on a pilgrimage to explore the footsteps of my Dad (he used to work on a farm … that he did!). Michael Doherty [Dads second cousin] was going to be in Castlederg (he and Dad were born there) while we were here, so we made our plans around meeting him [as he is the ‘oracle’ on everything Doherty]. I feel blessed with the luck of the Irish to have been able to meet him here in Ireland. 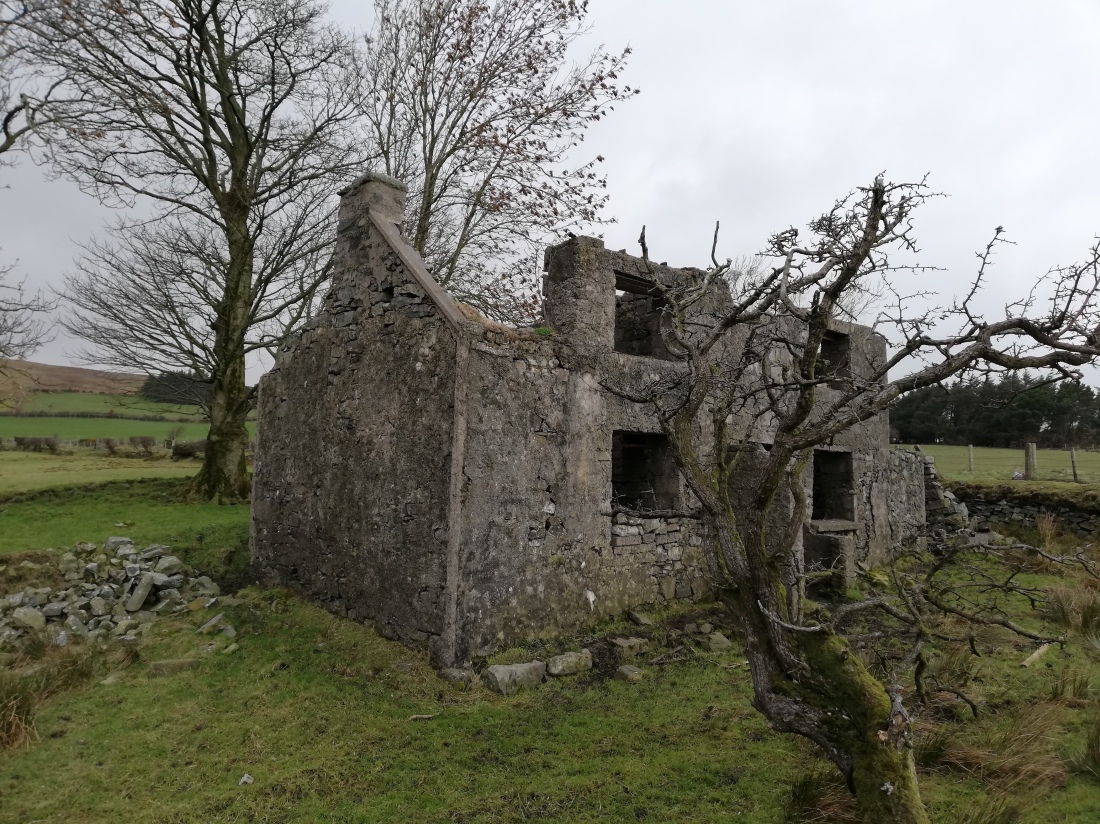 We stayed in the Mourne Mountains for a couple of nights [before heading to Castlederg] and did the scenic drive up, down and around them. The landscape is gorgeous – lush, verdant rolling hills which have amazing stone/rock fences or neatly trimmed hedge rows. Every vista was hanging with mist adding a magical feel, and as the rainbows appeared you would look for that wee leprechaun on his pot of gold or the fairies dancing on the sunlight. 🧚‍♂️

The roads are narrow and bordered by rock walls or hedge rows or even village homes which are precariously close to the road. There are church’s around every corner, and if you haven’t seen a church for a while, you will see castle ruins. And ‘littered’ across the country are small stone homes from an age gone by. Often the new house is built right next to the old one. When we were in Alberta there were hundreds of timber barns and homes and here in Ireland it is small stone houses or barns. I just love them and took untold photos. 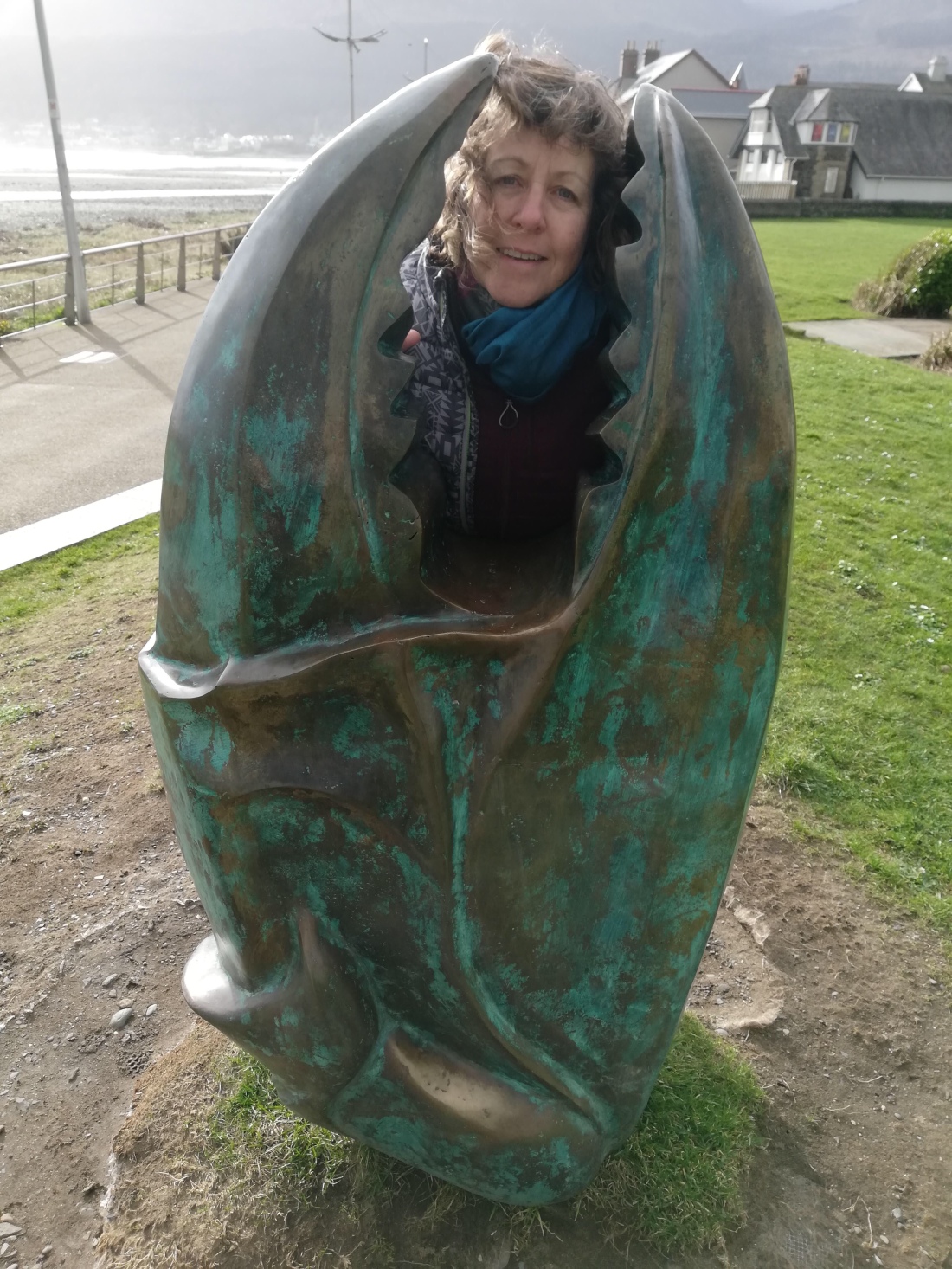 On our ‘Mourne’ drive we ended up in Newcastle for lunch and had a walk along the waterfront. We had a ‘sunny moment’ before a storm blew in. And when I say blew in, I mean really blew in … check out the tree!!! We had passed through Rostrevor, Kilkeel, Ballymartin (lots of towns starting with ‘Kil’ and ‘Bally’) and were staying in a very comfortable AirBnB in Hilltown. The rolling hills, scattered with ‘Irish’ sheep and the first signs of spring were all around us, but alas the sun was playing hide-and-seek! 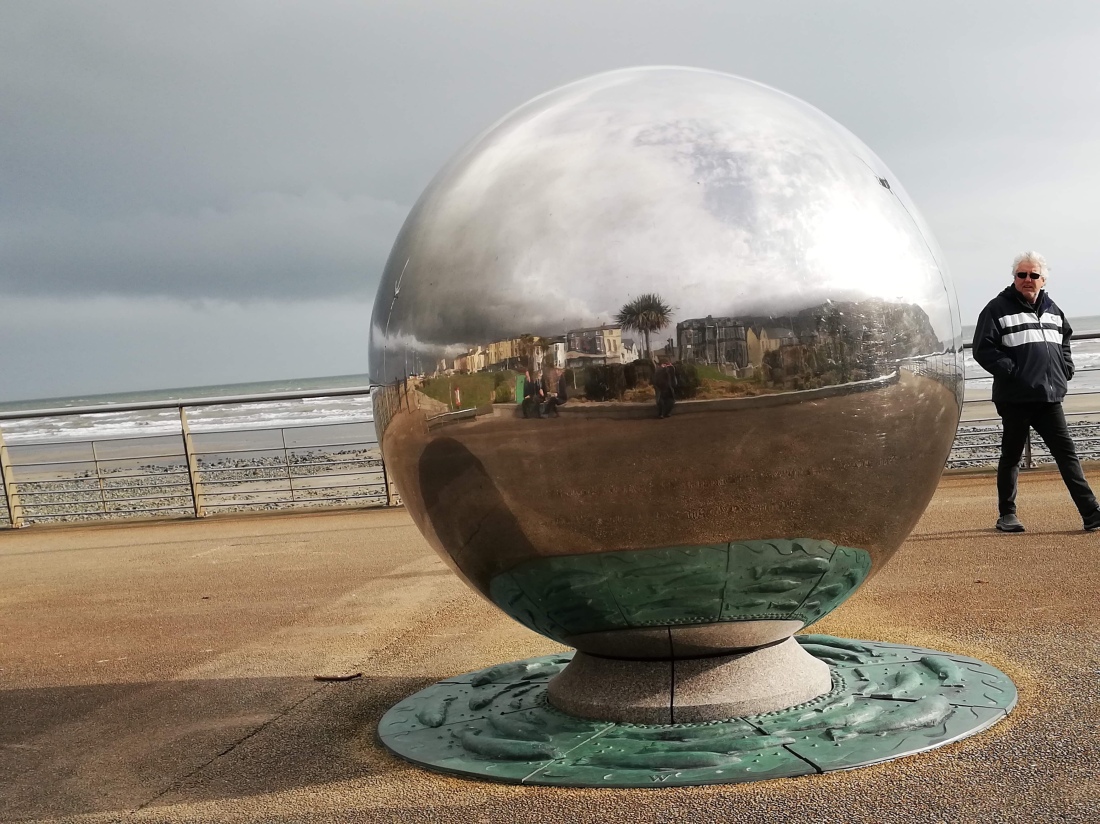 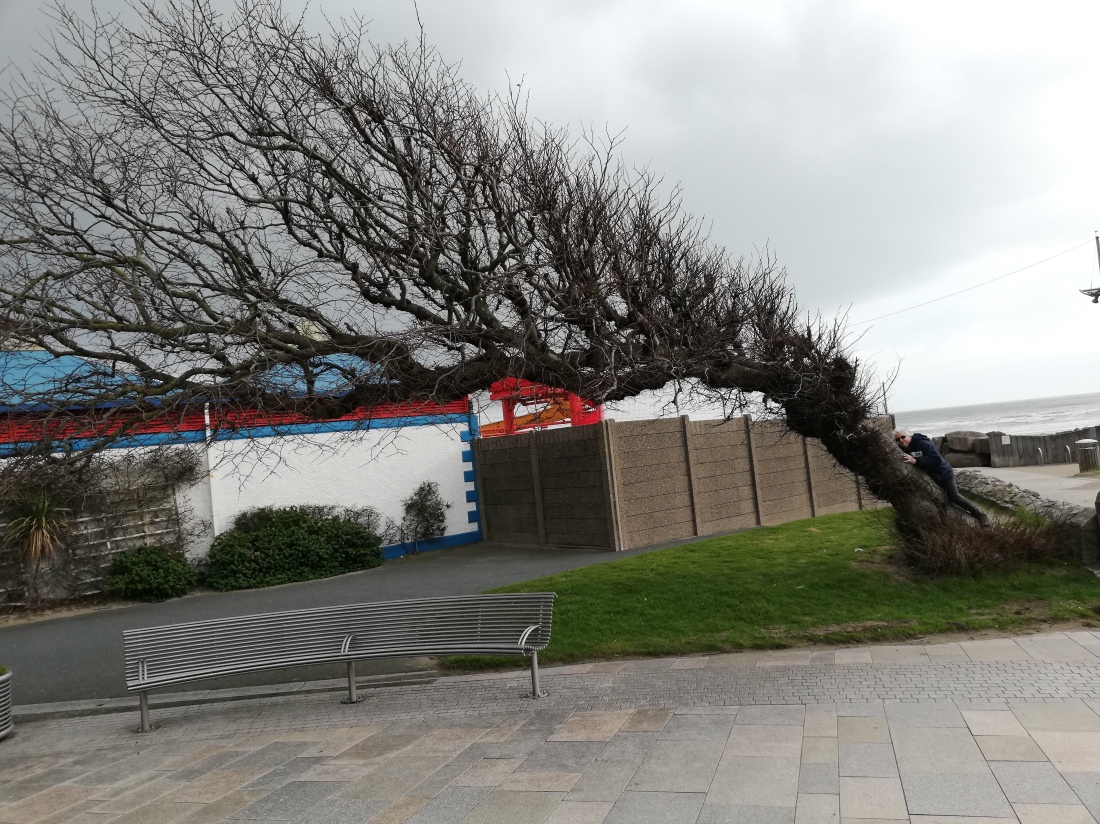 From the Mourne Mountains we traveled across to Carrigan which is in the Republic. We stayed here two nights so that we could visit Castlederg and meet Michael. He very kindly spent a few hours taking us around the place to various places that had a connection to my family history. First port of call was St Patricks Cathedral where my Great-Grandparents grave is and also where Dad was baptised. From there we visited another few cemeteries and churches, had a tour in and around the greater area and drove past a house that Michael lived in when he was young. It is a ruin now, but it was fascinating to hear his stories. After lunch we had a look at the ‘new’ arrivals on the family tree and discussed how amazing it is that we [the NZ Doherty’s] would be missing of this tree is Dad hadn’t done Ancestory DNA – the results have been astonishing. I just feel that having been here in Ireland has given me such a connection and am so grateful to Michael for sharing his ‘findings’ with me. I know you are reading this Michael, so from me to you thank you ❣ 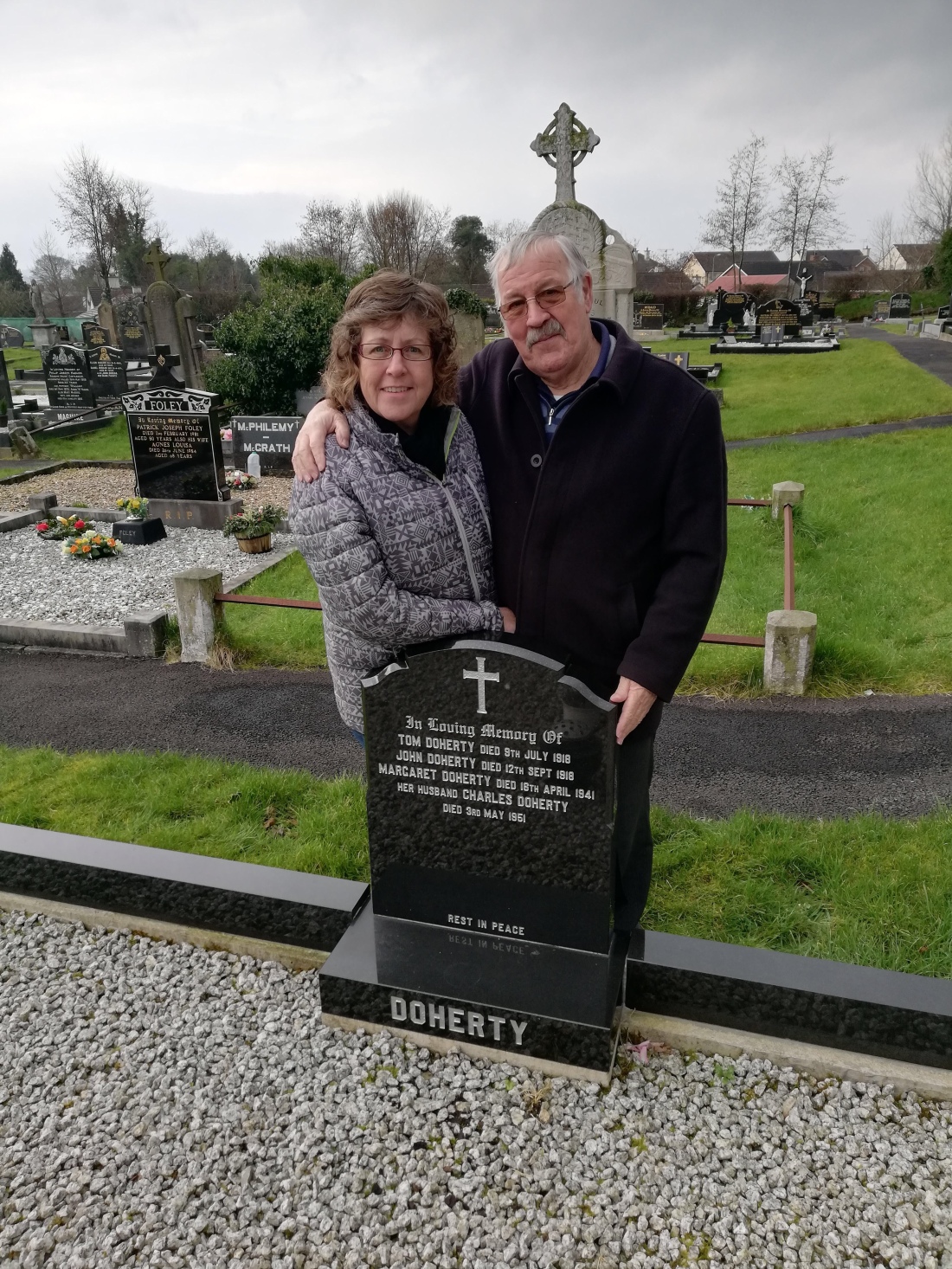 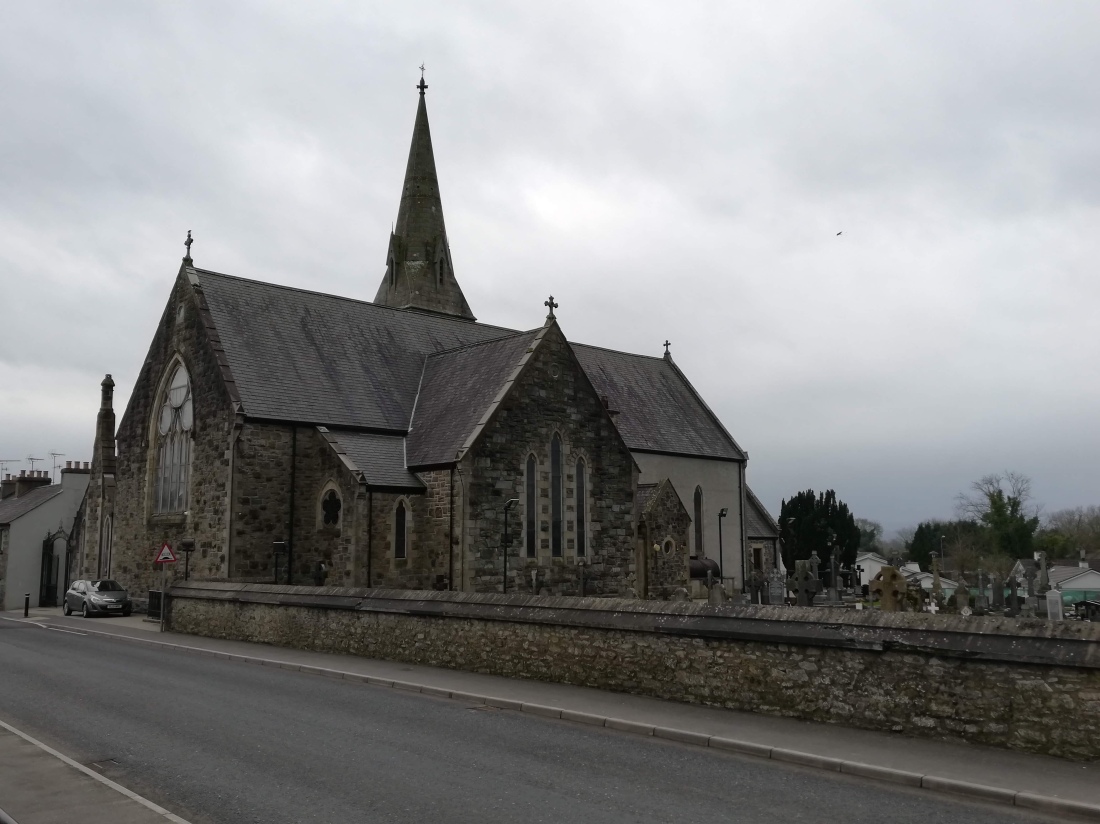 We drove on the next day back across to Carrickfergus to our next ‘pilgrimage’. I was determined to find Dad’s mate Ned, who he was in Australia and NZ with and Iris from the farm – I found both 💖 We called in to see Iris first but she was out, so we carried on up Islandmagee to find Ned. Now the address I had was Ned, Mulloughboy! I was expecting to find 6 houses and him in one of them!! It is a bit bigger than when Dad was last there (couple hundred houses!) so we asked the first bloke we came across and ‘oh begorrah’it was Ned. Can you believe that! Anyway Ned could hardly believe it, apologised he hadn’t shaved [he said he wasn’t expecting visitors 😆] and then we made plans to go out for dinner the following day, as he had a family function that evening. He sure would have had something to talk about!!

After leaving Ned we called back in past the farm to find Iris, but she was still out but we did find her son who called her and we made plans to visit the next day. It was just wonderful to meet both Ned and Iris, who very kindly shared the fond memories of Dad when he lived in Islandmagee. When we took Ned out for dinner we were able to call Dad on ‘facetime’ so he could have a quick chat with Ned. All in all visiting Islandmagee and Castlederg has been “supercalifragilisticexpialidocious” [it’s a real word!] 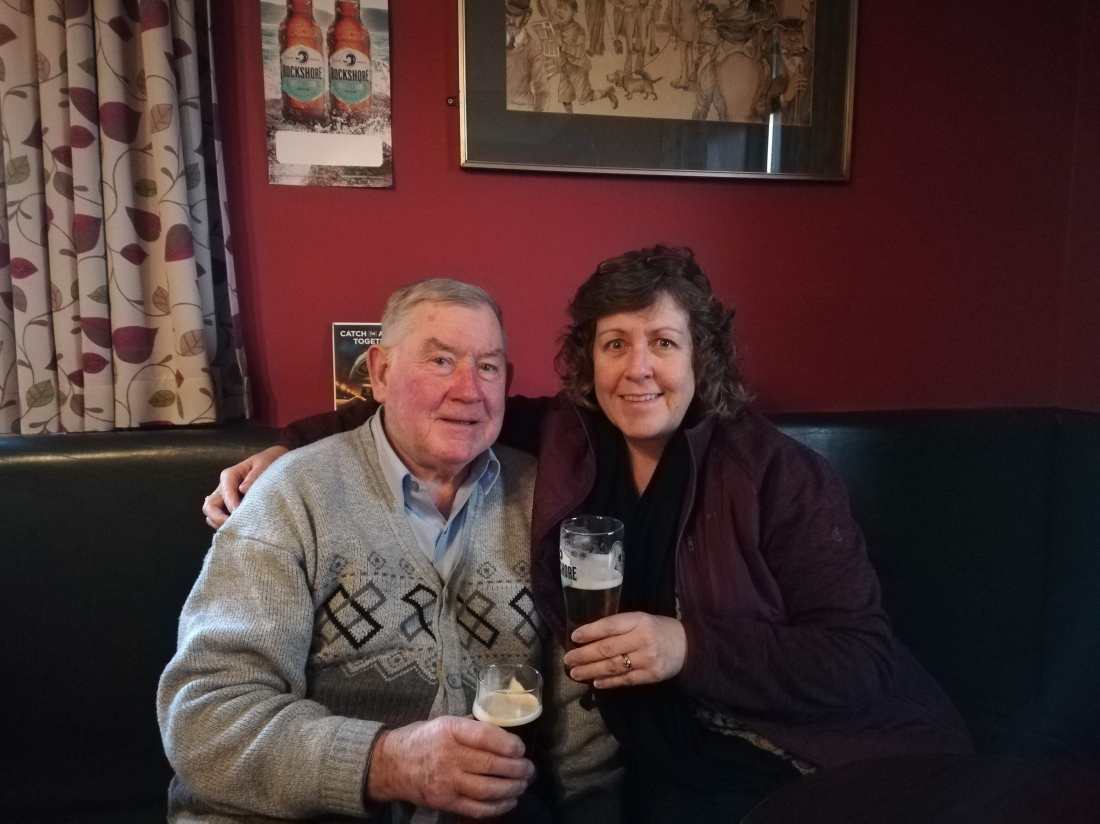 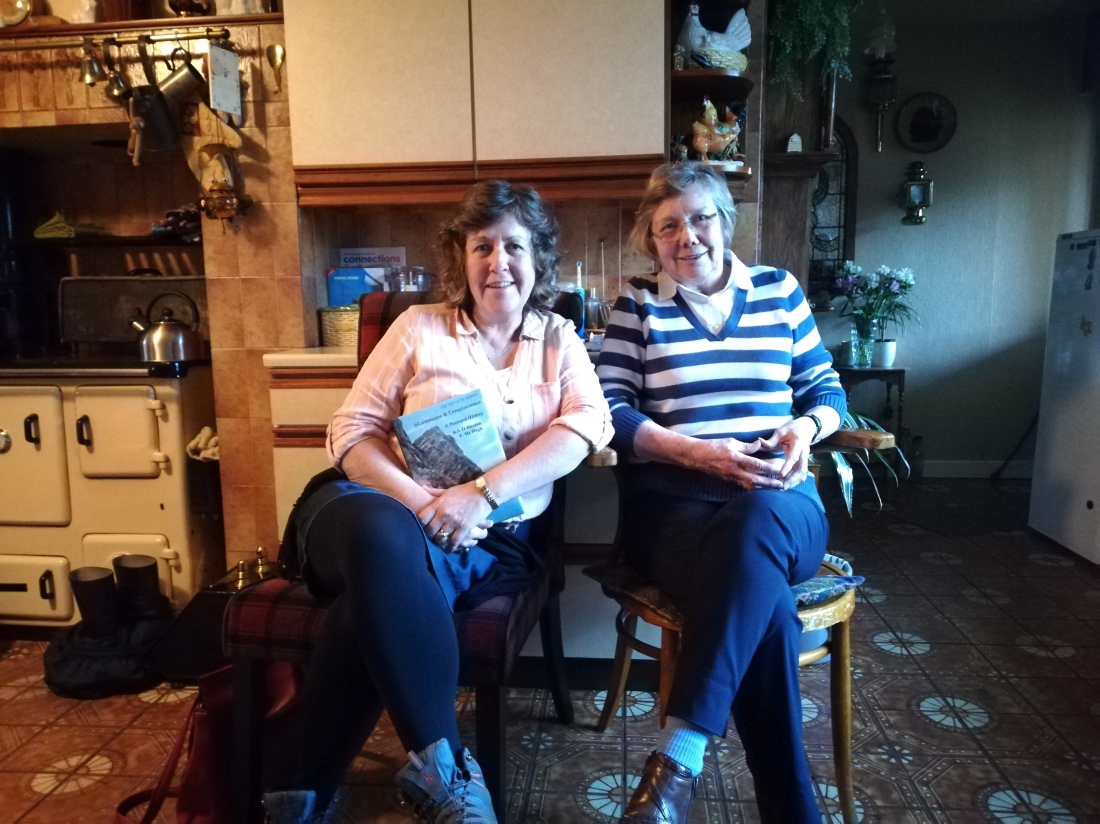 We managed to get a day in Belfast and did a Black Cab Taxi tour. It was only an hour but it was great and covered the history of the troubles and the Wall, and how Belfast is becoming a dynamic city for the future. There is still some of this wall standing but now it is called the Peace Wall. We also visited the Titantic exhibition but that was a bit underwhelming! 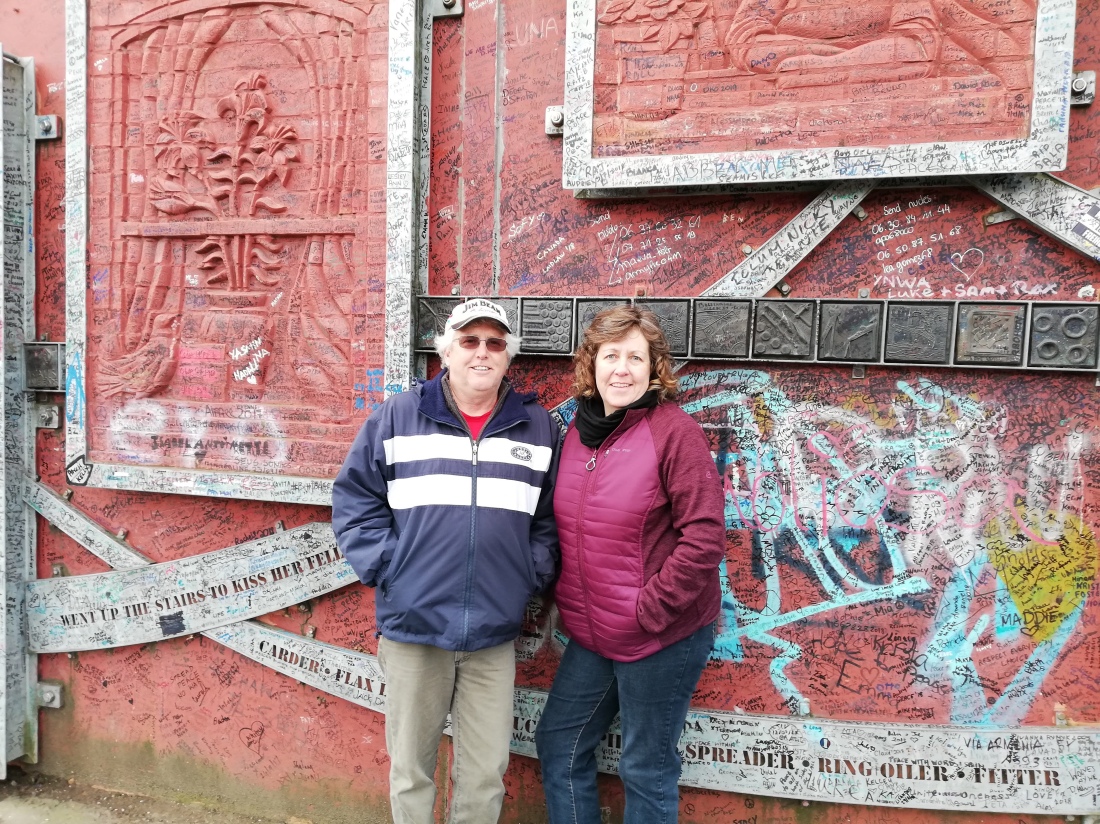 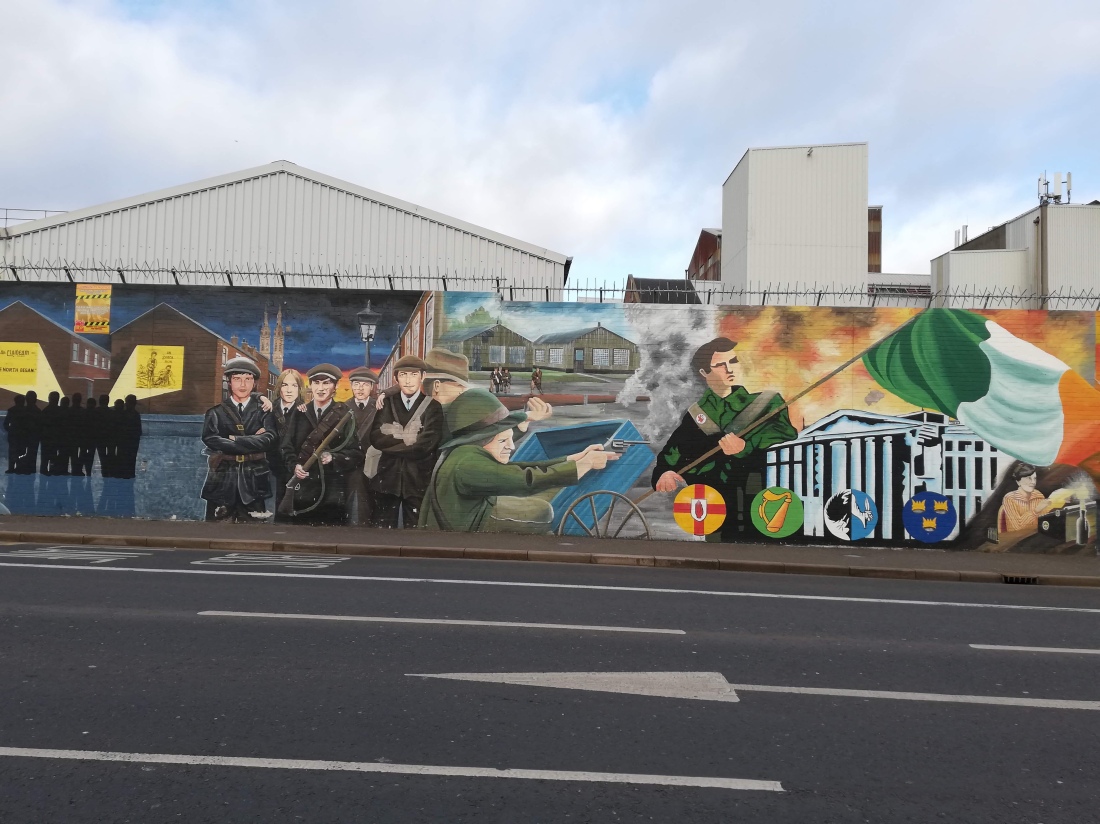 From Islandmagee we headed North [anti clockwise] up through Larne, Ballygalley, the Glens, Cushendall, Cushenden, Torr, Ballycastle to Carrick-a-Rede where we walked the planks! It was wet, windy and wild and a swing bridge. OMG, I am really pushing the limits but, I got out there and did it! Actually, by the time you are in a queue and people are behind you … you just have to do it!!!!!!! 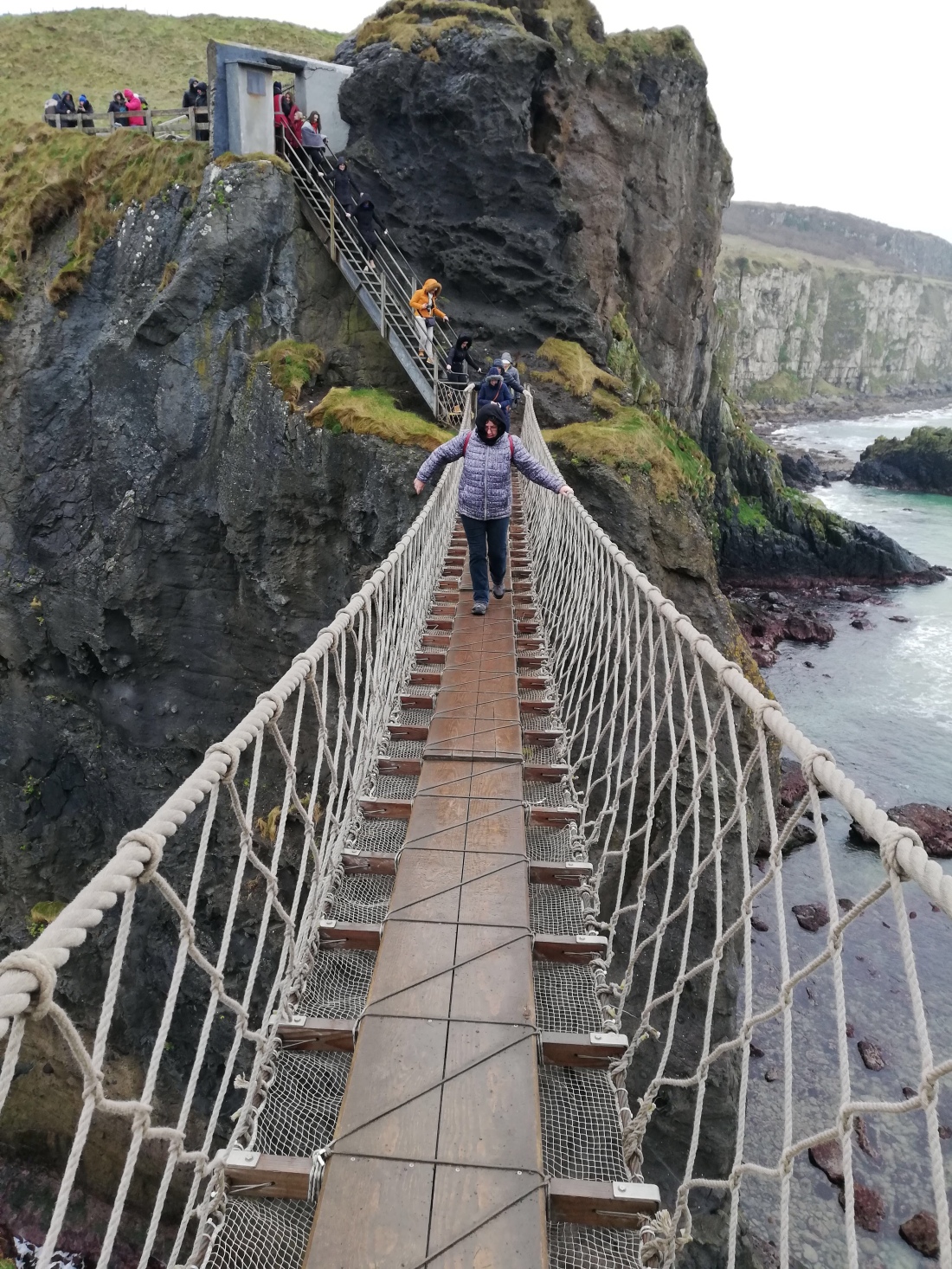 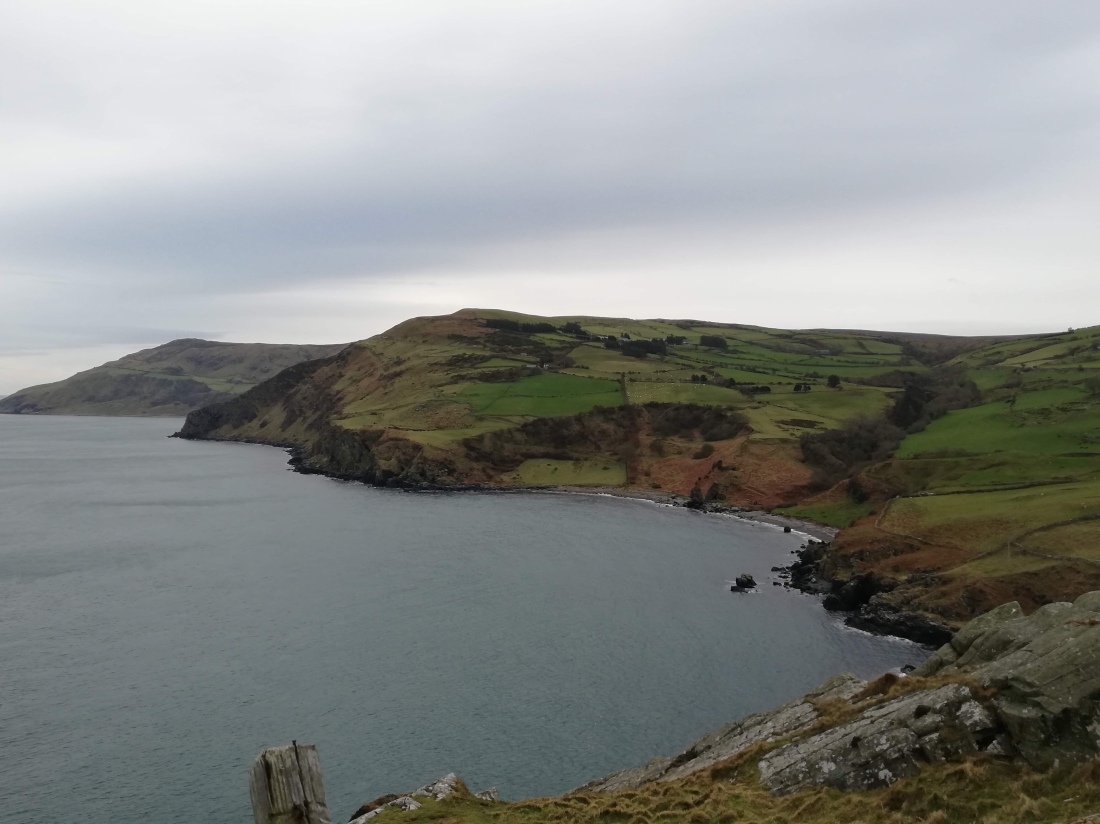 From there we headed up and around to the Giant’s Causeway where it is everything you have ever heard about … just a wonder of the world. So cool to finally be able to take my own footsteps. Our drive in around the north has been lovely, there are sheepees and lambs everywhere, daffodils by the thousands – it’s a thing where everyone plants them and they are like yellow glitter on the landscape. 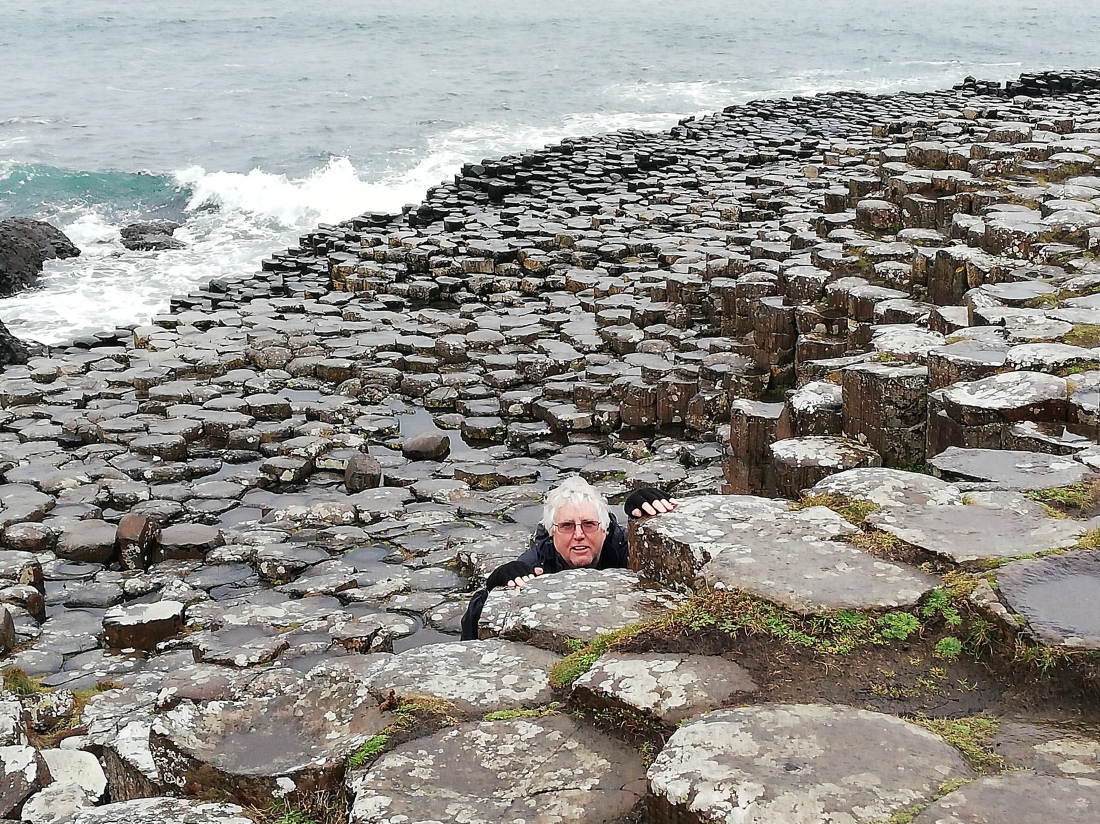 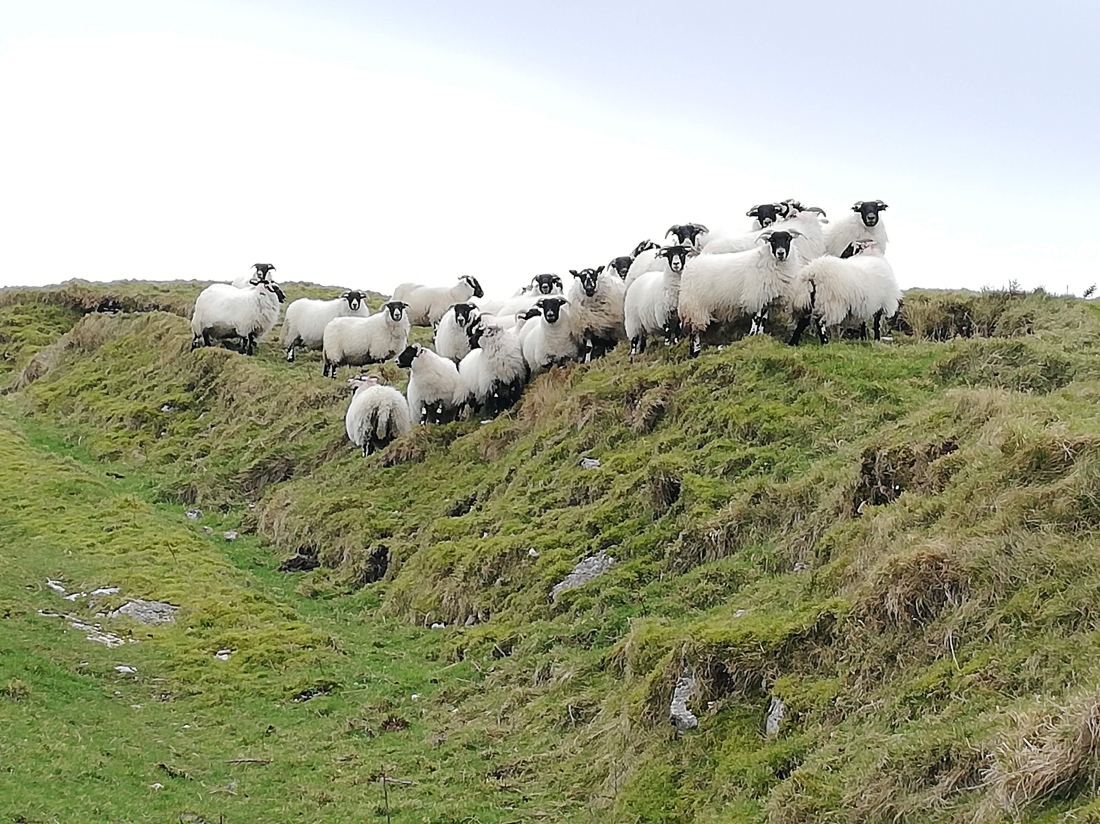 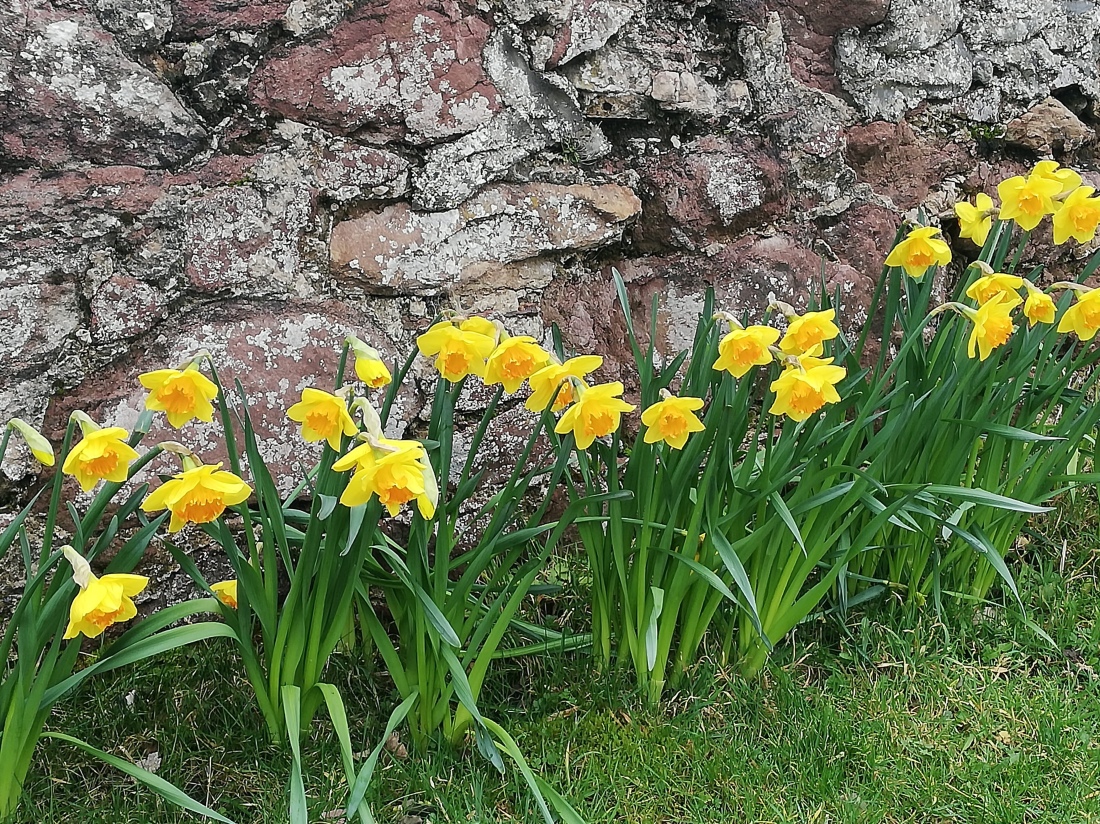 We stopped in at the Mussenden Temple on our way to Derry. It has a fascinating history built in 1785 as a summer library for the lady of the estate. It is perched 120ft above the sea below. The estate itself has beautiful grounds and the temple has survived longer than the home! We were fortunate enough to have a break in the weather here, but it wasn’t long before another rain shower came at us from across seas, so we headed for Derry.

Derry is a lovely town which was ‘walled’ in the 17th Century. We did our own walking tour here and just strolled around enjoying it while it wasn’t raining. It is really lovely, has wonderful buildings and street art and of course a church or three! 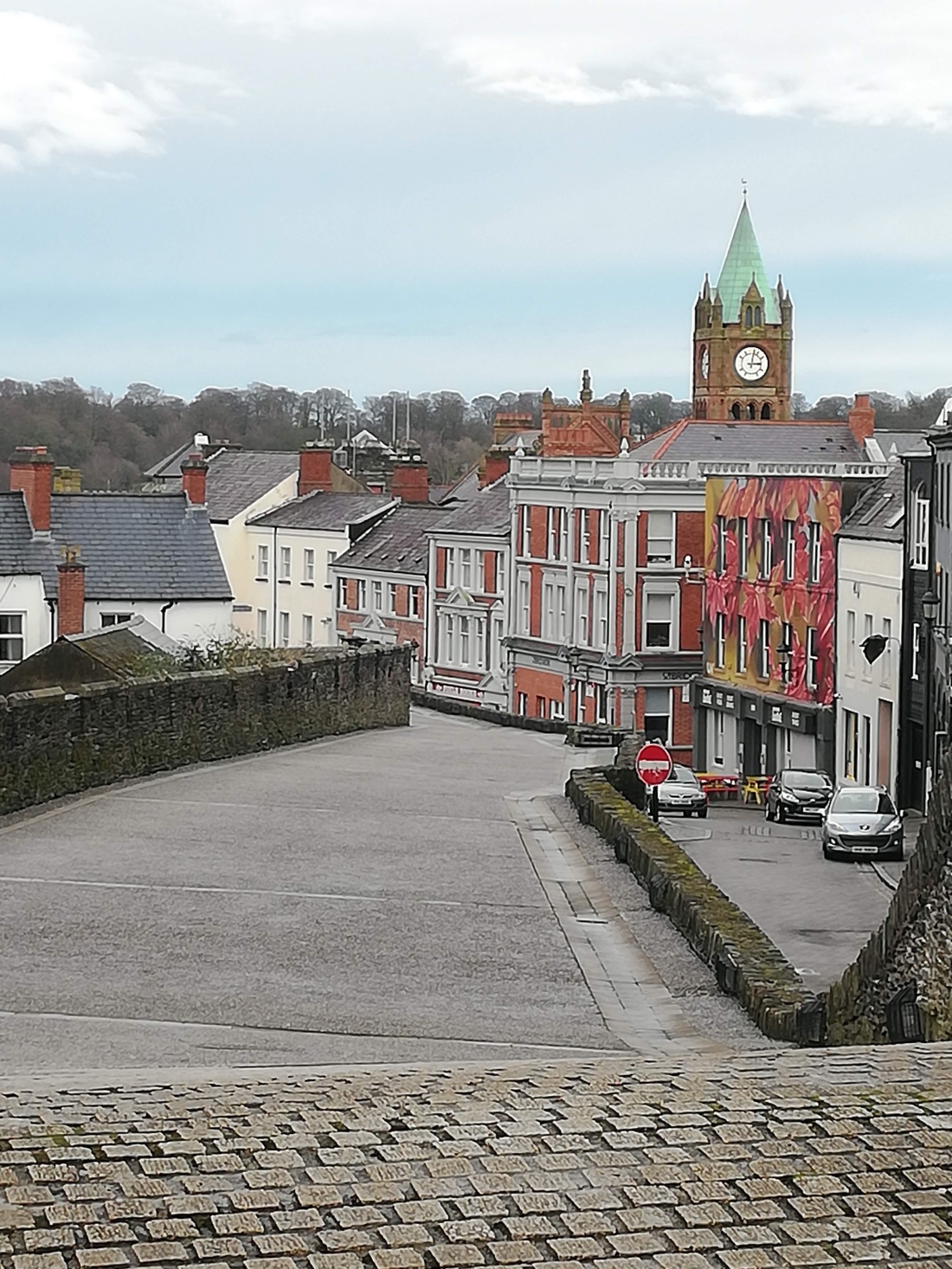 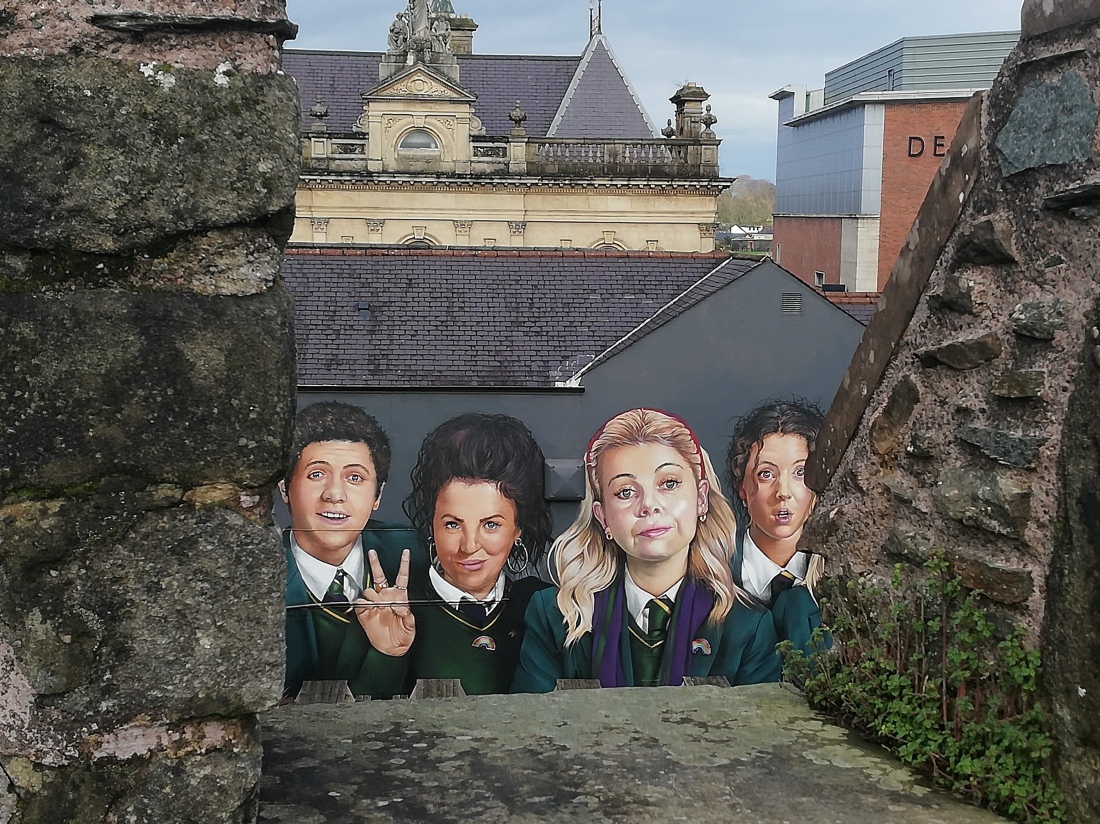 I have so much more to share, but that’s it for this instalment from Ireland 🇮🇪 ☘️ 😊