After our Chateau experience (and it wasn’t bad, just not fabulous) we travelled to Valence-sur-Baïse for our next ‘Mr & Mrs Smith assignment’. We drove back through Fleurance, grabbed a few groceries and a bottle of wine and headed to meet our new home owner, Sarah and her daughter Kaia, along with their 3 dogs and 5 cats.

After a very friendly welcome and a casual lunch, Sarah took us on a wander around her property to show us where the dogs like to explore. It is a very cool property and was originally a lock-keepers house, with the river Baïse running alongside complete with lock and private (triangular) island covered in trees and with its own little walk ways. Such a gorgeous place.

As the river winds its way along, they [canal authorities from the past] have in many places taken a ‘short-cut’ around a bend and placed a lock. So you end up with ‘an island’ accessible by the lock bridge. This property we looked after is separated by the lock, but bordered by the river, which creates the island.

The dogs and cats have this amazing space to roam. It would have been an incredible place to grow up here as a child, but at the same time almost terrifying for a parent. When we arrived the river was running high. On the opposite side to the lock, a weir has been created in river, which acts like a pseudo-dam to ensure water supply to the lock. The river was raging and the weir was like a mini Niagara Falls. You could hear it before you could see it. (This photo was taken the next day when it had calmed down a bit!!). Sarah showed us photos of the property when it was flooded and the lock was nowhere to been seen and the island covered in water, becoming part of the river 😮 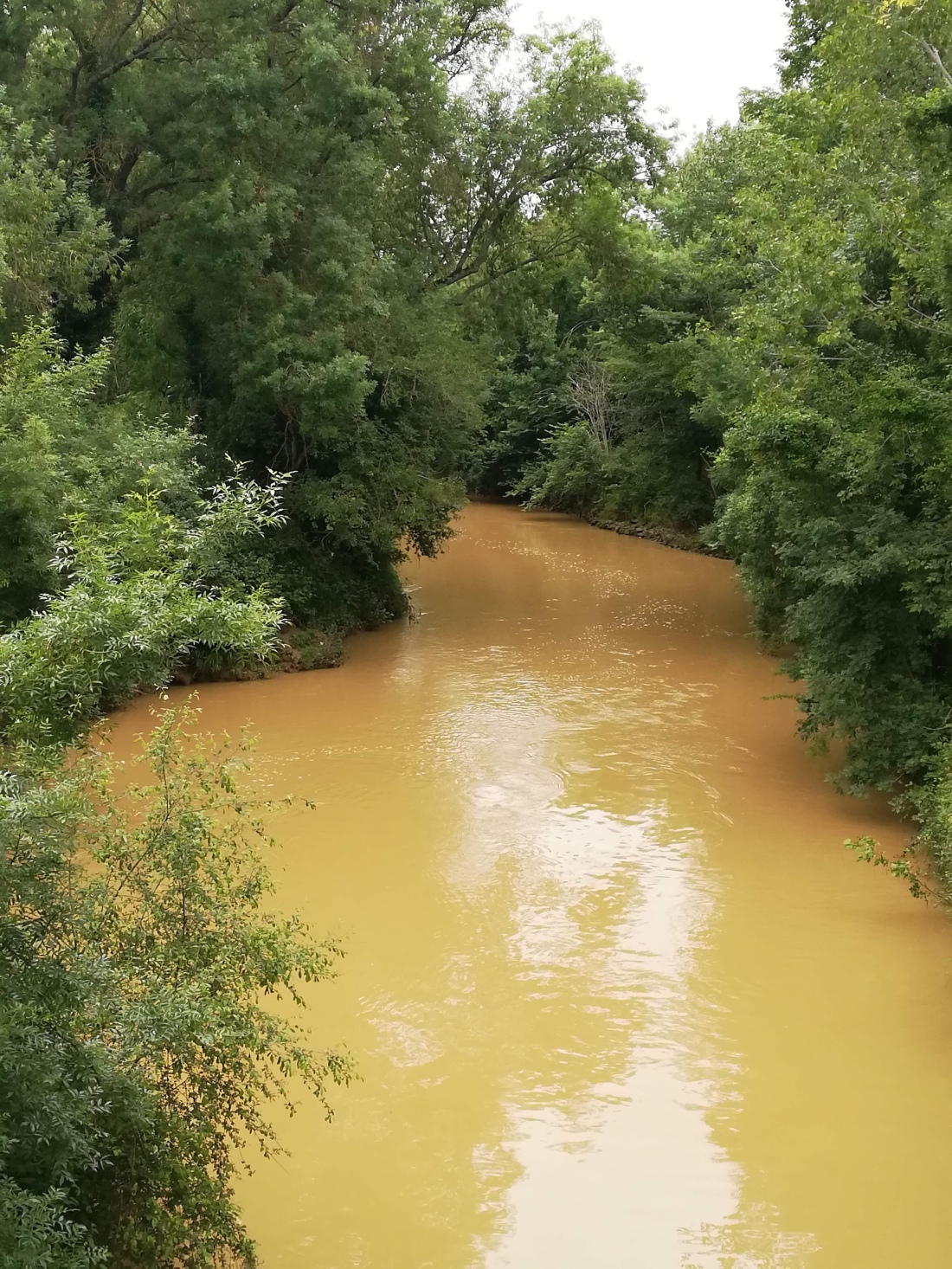 We explored the island with three dogs charging about and clearly just loving having the freedom to chase things. We were excited to be able to walk about here each day with the lovely Lana, Iris and Saba. A short time later we became aware the Lana wasn’t circling back to check on us and Sara said not to worry she would be digging for mice or other treasures. We returned to the house but Lana didn’t follow, so Colin was dispatched to look for her – remembering that she can’t get off the island [actually she can, but just not today with the water being high].

As time ticked by, the level of concern was raised and it was wondered if Lana had fallen in the river. So another anxious explore of the island, checking as much of the surrounding area as possible and calling, and calling and calling. It was decided to drive along the river a short distance to see if she had been carried further down than expected. Sarah took Colin, and I stayed at the house returning to the island checking in case she was clinging to the bank without being able to get up the steep sides. When they returned without her, and I hadn’t found her we ventured further into the surrounding areas. I was dropped a bit further down the river and walked all along it, while Colin and Sarah went to the next lock.

It became an urgent search for an older dog. I walked for a few km’s along the river and back, and agreed to meet Sarah and Colin at 8pm [it doesn’t get dark til 10pm]. They had been to the next lock and also around some of the fields that border the river. We then searched along another field together, but had no luck finding her. We returned to the house and Colin noticed he had lost his phone!! So we returned to the last places he had been to look for that and a chance to look for Lana again while Sarah stayed back and posted in the local lost pets, Facebook, Community pages … before long a whole group of people were sharing and planning a search for Lana. We finally had some dinner about 10.30pm and decided to regroup in the morning.

As the next day dawned, an army of people were spreading the word, flyers were being printed and we were out searching again. Sarah was of course trying to get sorted to fly off on her holiday that afternoon. Colin and I headed out to our local ‘Condom‘ to get a few groceries and have a search in some of the same places we had been the previous day. We were all hoping that Lana had managed to get out of the river and was just somewhere she hadn’t been before, so technically lost.

Sarah (and Kaia) set off later in the day on their holiday – we promised that we would keep the search up and keep liaising with the local groups. Although Lana has a collar with her phone numbers on it, it was decided that someone who speaks French would be the best contact locally. Every time the phone rang I eagerly answered it and with fingers crossed hoped that someone could speak English! As it turns out the 4 or 5 times the phone rang it was recorded messages. We returned to Condom the next day and collected some flyers and spent the afternoon walking locally placing them wherever it seemed possible someone may be walking, remembering that we haven’t been here before and had no idea really!! Anyway, we drove to the local supermarkets in Condom and placed flyers on the noticeboards, and stopped at every bus stop or town square we could find to put up more flyers. There was one on ‘our’ lock as well. And the river had returned to its usual idyllic pace.

After a couple of days we had resigned ourselves to the fact the it was most likely that Lana had been claimed by the river, although did continue to search for every day as much as we possibly could. Such a sad and traumatic way to make new friends but somehow you just know that your hearts will continue to be connected along this life journey 💕 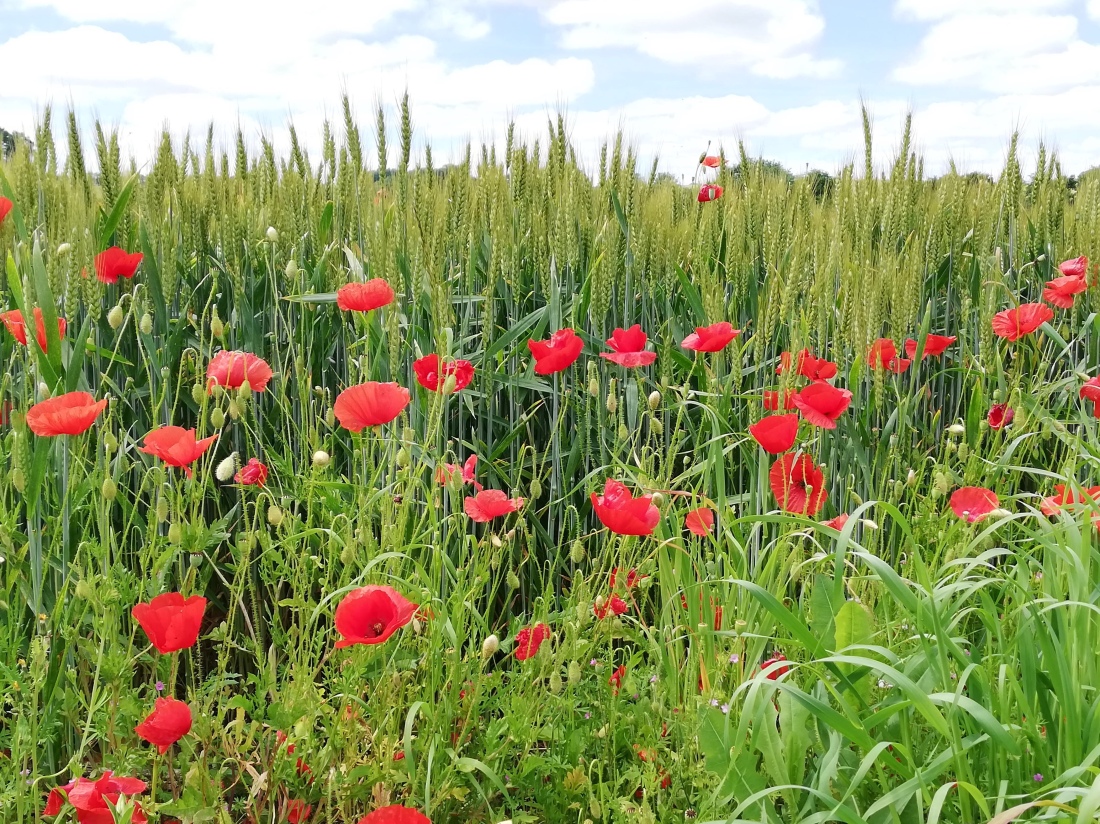 We were in constant contact with Sarah and she encouraged us to get on and enjoy out stay. The next few days we planned a few road trips and visited so many [more] gorgeous villages … Valence-sur-Baïse, Condom, Fourcés [with its circular town square!], La Romieu [with the legend of Angeline and her cats], Larressingle [a fortified village on a hill], Lectoure [on the Pilgram trail to Spain], Lavardens [fortified city on a hill], Vic-Fezenac [vic = town without a wall], Montreal-du-Gers [with a wonderful town square with the amazing concrete arches around the edges, with lovely cafes and shops] Nerac [with a lovely historic district and wonderful gothic bridges over the river Baïse and so many more. 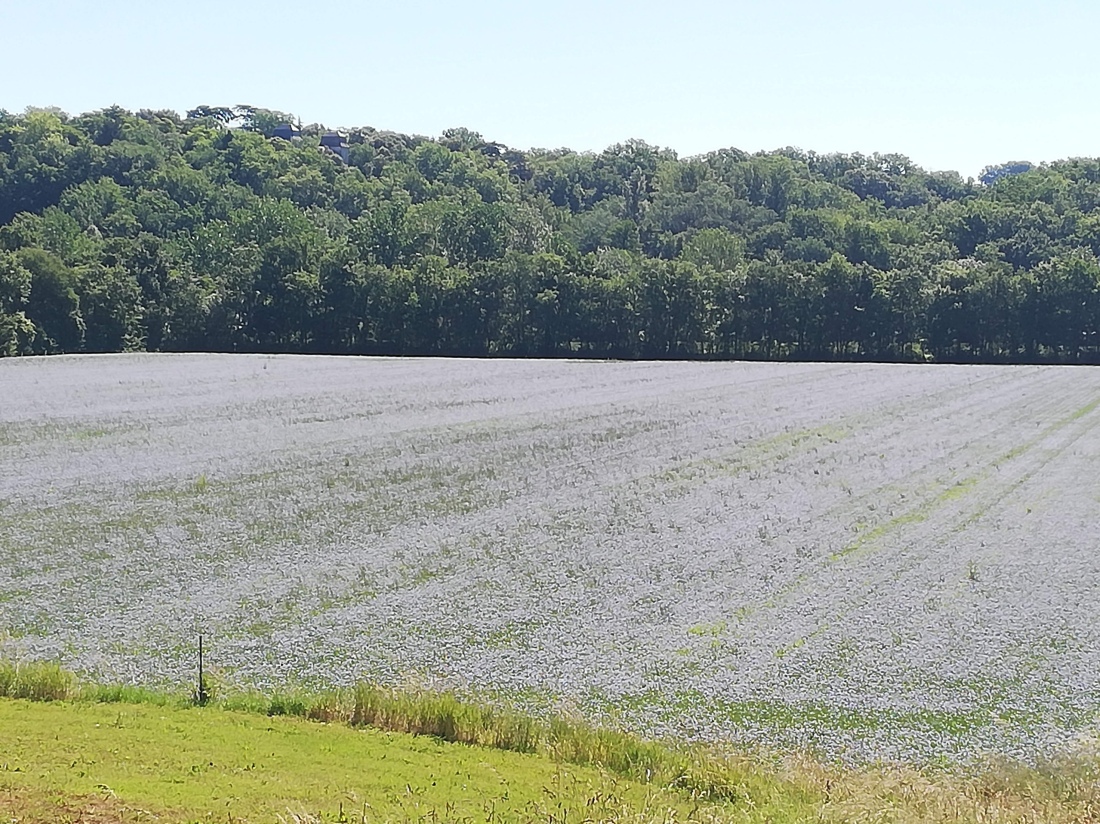 Our ‘mini’ road trips [on secondary roads] took us by more Cathedrals, Chateaus, skylines dotted with turrets and fields for as far as you can see …. all the way to the snow capped Pyrenees. The wheat fields with poppies along the road side, the purple carpets of the linseed crops, the yellow mustard flowers and the endless lines of the tractors through the fields. All very beautiful and all very charming the South-west region of Occitanie, France. Combine all that beautiful landscape with the magnificent ‘tree avenues’ that lead you into, or out of all those charming and fascinating medieval villages and towns, and you can see why people just love hiking, biking or driving in France. 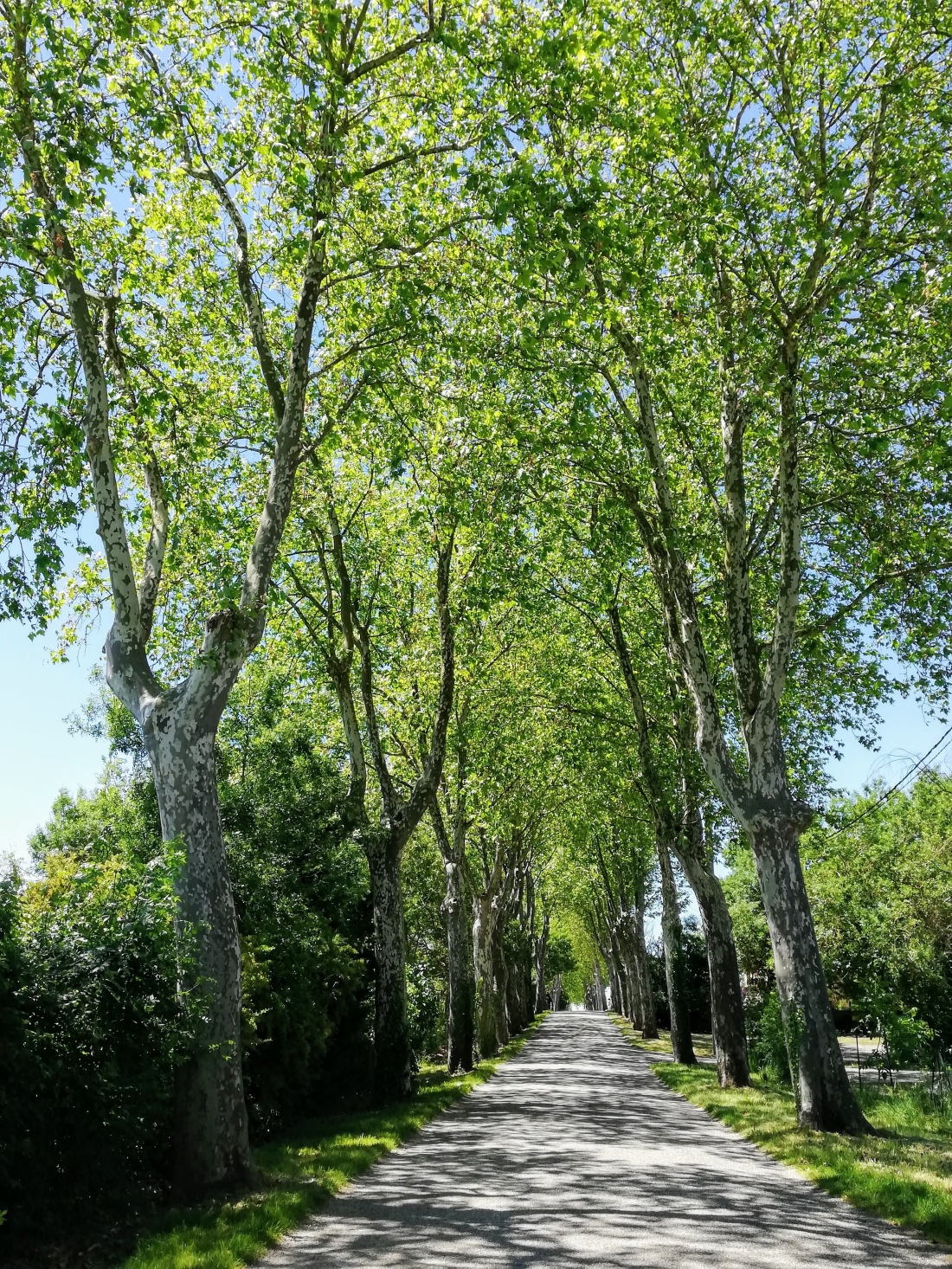 Our week in Valence-sur-Baïse was a challenge, but one that we rose to. Sarah still managed to have her holiday, albeit with a heavy heart. We still had an amazing experience staying with all the other lovely pets and enjoyed walking Saba and Iris on her wonderful property [although, I must say I was a tad nervous!]. Colin played with the lock a couple times [just to check the flow of the water!]. The whole week we only had one small boat with an outback motor come through the lock – it was a very funny thing to watch, but I have waffled enough. Ask me about it when we get home! 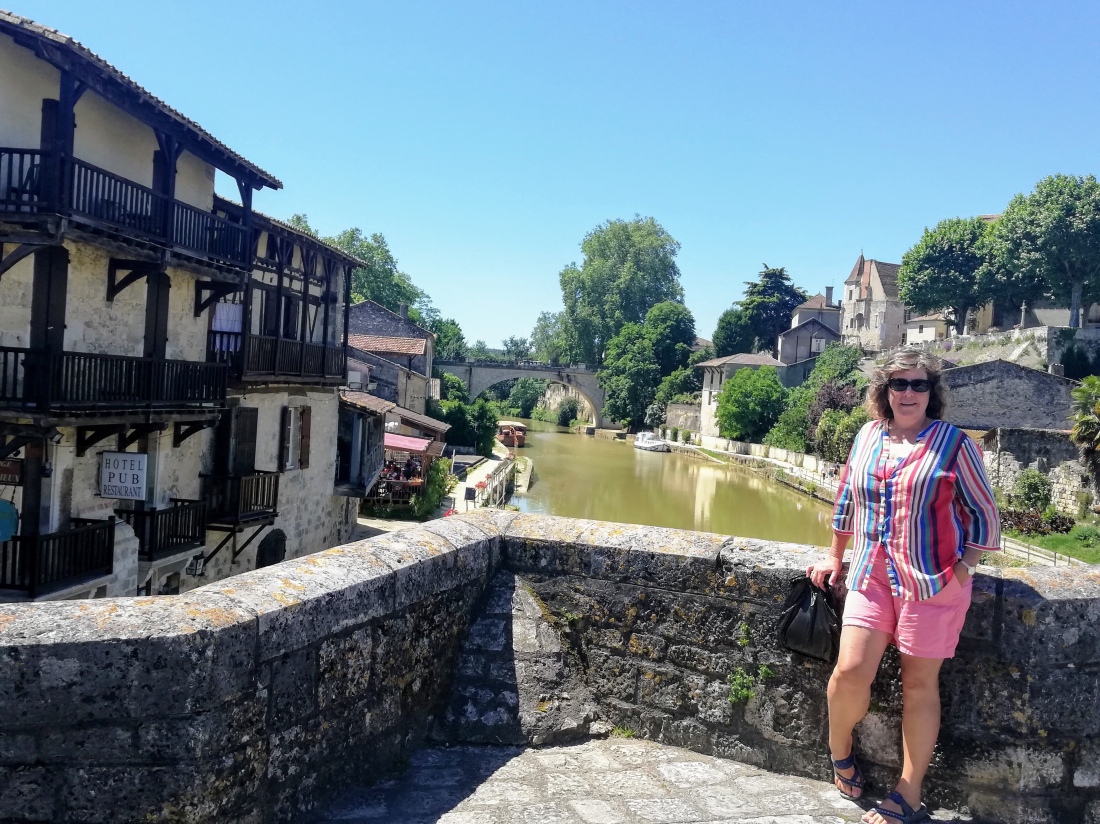 So that’s the synopsis from last week. We are now in Portugal for three weeks on our 11th (and last) Mr & Mrs Smith assignment, before our homeward journey begins.